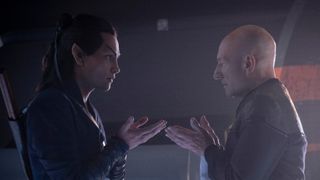 Along with the Klingons and the Borg, the Romulans are among the most enduring enemies of the Federation. It’s pretty much a given, then, that the destruction of their home planet (as witnessed in JJ Abrams’ Star Trek) has had major implications for the universe we beam into at the start of Star Trek: Picard.

Jean-Luc himself is troubled by the failure of a mission to save Romulus from a supernova, while its former inhabitants have had to deal with the rather major inconvenience of losing their home.

Harry Treadaway, who plays another Romulan called Narek, chips in: "But in strong, powerful ways, which will ultimately have impacts on our behaviour and actions."

As for the specifics of what’s been happening to the survivors of the Romulan Empire since their home got caught up in a supernova, the duo are rather more cagey – though Evagora does reveal that he’ll be speaking in his own accent in the show, “so you’ll be hearing a Romulan speaking with an Australian accent for the first time”. We’ll have to wait and see whether that’s because there’s a Romulan settlement in Melbourne, or simply a glitch in the universal translator.

As for Narek: “Michael [Chabon, executive producer] filled in some backstory for me,” explains Treadaway. “We spoke about how my character had grown up away on another planet somewhere, and had always been aware [of the loss of his home].”

Meanwhile, Evagora divulged a little more about Elnor at a Q&A following Star Trek: Picard’s UK premiere. “I’m very different to Narek and Narek’s very different to me,” he said. “[Elnor] wasn’t raised how Narek [was]. He’s a refugee, due to his planet being blown up, and what makes him different is the fact he was raised by this all-female sect of warrior nuns. He believes in absolute candour, he doesn’t know how to lie – his naivety is something very special, and I think it shines a lot of moments of truth when they’re needed aboard the ship.”

GamesRadar+ also spoke to the Picard team about where the show fits on the Star Trek timeline and how the Borg will play a key role in the show. Our sister publication SFX also spoke to Stewart about his future in the Star Trek universe, with the actor revealing he would love to work with Quentin Tarantino.