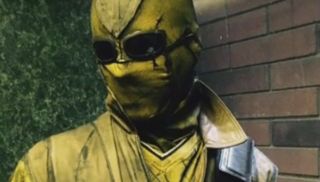 With Michael Keaton's Vulture and Michael Chernus' Tinkerer, Spider-Man: Homecoming is not wanting for villains. Now it seems like we can expect to be introduced to a third bad guy in Spidey's upcoming solo film, as some new set photos of what looks to be an in-costume Shocker (heavily rumoured to be played by Bokeem Woodbine) have popped up online.

The presence of what looks to be a third villain will no doubt have fans worried that Spider-Man: Homecoming will be the latest superhero movie to have one too many rogues, not least because The Amazing Spider-Man 2 and Sam Raimi's Spider-Man 3 are perhaps the two most cited examples of this perceived problem.

For my money, the amount of villains is not necessarily an issue as it all comes down to execution. Batman Begins is one instance of how having multiple villains in a comic book movie - Carmine Falcone, Scarecrow, and Ra's Al Ghul in this case - can actually work well. So long as Shocker has enough screen time to make an impression but not so much that it upsets the balance of the movie, his inclusion should work out just fine. We'll find out next year.