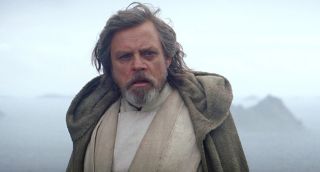 Only in Star Wars would some old, hooded guy wearing a piece of jewellery be big news but, welp, here we are. According to rumours, (which, of course, you should take with a Death Star-sized grain of salt) Luke Skywalker is hiding something very powerful around his neck in Star Wars: The Last Jedi – something that would put him firmly in the sights of those on the Dark Side. Warning: possible spoilers ahead.

Making Star Wars is reporting on whispers that Mark Hamill’s Jedi Master is wearing a necklace with a suspiciously-red looking trinket hanging from it. In fact, the rumour goes that he’s got a kyber crystal: the very last piece of his father Darth Vader’s lightsaber.

We’ve already come across kyber crystals – essentially the foundation for crafting a lightsaber – recently in Star Wars: Rogue One. That even including Jyn’s mother wearing a necklace with a kyber crystal. The series has previous, then, so it’s not surprising to see that element introduced there to the mainstream before really hitting home with a tantalising twist that will keep people guessing just whose side is Luke really on.

Why would he keep a piece of Vader’s lightsaber? As a memento? A warning? Or something entirely more moustache-twirlingly nefarious? Either way, I’ll bet you a pint of blue milk that Kylo Ren, Snoke and the rest of Star Wars: The Last Jedi’s rogues’ gallery would be very interested in Luke’s necklace.