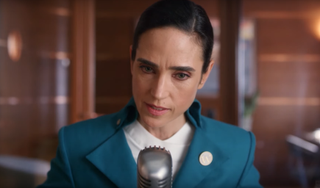 The first trailer for the post-apocalyptic series Snowpiercer has been revealed at Comic-Con, teasing a very cold turn from Jennifer Connelly. Based on the same comic-book series as Bong Joon-Ho's 2013 film, the new series will expand on the story across multiple episodes. Watch the trailer below.

As with the movie, the series centres on the remnant of humanity, who are all stationed on a perpetually moving train that circles the globe. Why does the train have to constantly be moving? Because the Earth has become a frozen wasteland due to global warming and a climate engineering experiment that went wrong.

No exact release date was announced, but we can expect the series to debut Spring 2020. The series is being released by TBS in the US.

For more clips from SDCC, head over to our SDCC 2019 trailers hub, and take a look at the San Diego Comic Con 2019 schedule so you know exactly what to expect in the days ahead.