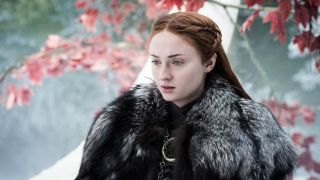 Everyone is getting prepared for a fight in Game of Thrones season 8 – and that includes Sansa Stark. While several of the Stark clan have seen their fair share of bloody battles and brethren slain, the eldest Stark child has (for the most part) kept her hands clean. But an upcoming small, but important, costume change might be hinting at big things to come for Sophie Turner’s character.

During an interview with EW, Turner reveals that, yes, the upcoming six episodes (or fewer, depending on, y’know, the unthinkable), will be the “first time” that Sansa Stark has worn armour during the show’s run. The change of attire speaks volumes – Sansa has never seen fit to wear any plates or chainmail before, and she can count Joffrey, Cersei, and Littlefinger among her closest companions throughout the show’s run.

So, winter is coming – and everyone is taking precautions. While no pics of the new Sansa Stark armour have yet been revealed, EW describes the get-up as “not Jaime Lannister or Brienne of Tarth-style metal armor, but more like a jet-black ensemble made of thick leather or similar material.” Nice.

Maybe don’t expect Sansa to go out, sword in hand, swinging at the Night King, then. But it’s not going to be far off it as Turner hints that she’ll be fully prepared to defend her ancestral home, no matter what it takes, saying: “I wanted her to have a bit of armor and be a bit more warrior like. She’s like the warrior of Winterfell.”

My best guess? She’ll be battening down the hatches for a battle that Peter Dinklage has already described is going to make the Battle of the Bastards look like a theme park. Maybe double up on that armour, just in case. The Night King is the main thread, but you never know who’s going to stab you in the back…