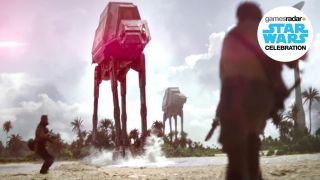 The Star Wars Celebration is in full swing, bringing us loads of new info on all things galaxy-related. That includes a first official look at the tropical location used by the Galactic empire in Rogue One: A Star Wars Story to construct the first Death Star. Wait, TROPICAL? Yep. The Stormtroopers were clearly tired of skulking about in the dark recesses of space, choosing to build their planet-obliterating weapon in a "secluded world" known as Scarif. Take a look:

The planet definitely has that 'beach getaway' vibe to it, despite being the site of a major military operation. Early details on Scarif reveal that "huge tracts of land were excavated to build ships and supply the Death Star" on the planet, which is also protected by a massive deflector shield. That rules out sunbathing for the rebels - led by Felicity Jones' Jyn Erso - whose main mission is to stop the Death Star from being built.