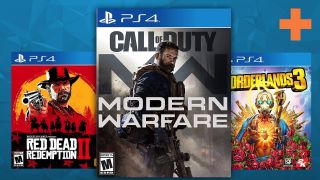 Ready for the hottest video game deals of Black Friday and Cyber Monday that the Internet has to offer? Well you're in the right place as we've rounded up today's biggest deals, which you absolutely can't miss. We've done the hard yards hunting down the best deals from the hundreds of game discounts this past 24 hours has seen. If you're looking for some of the best PS4 games, best Xbox One games, and best Nintendo Switch games in the Black Friday game deals we've got you covered.

10 hottest US deals at the top, UK deals beneath.

Call of Duty: Modern Warfare | $38 at Walmart
Save yourself $22 on one of the best Call of Duty games in years. Infinity Ward did an incredible job on this Modern Warfare reboot, and now you can get it for just $38. It's also available on Xbox. View Deal

The Outer Worlds | $39.99 at AmazonObsidian released one of the best RPGs of the decade with The Outer Worlds. A decidedly old school style game that's purpose built to help you waste away the hours over the holidays. View Deal

Skyrim Special Edition | $20 at Walmart
Sure, it is statistically probably that you've owned Skyrim at least once in your lifetime, but when it's got 50% knocked off it's hard to resist the temptation to dive in again, isn't it? View Deal

Madden 20 | $27 at Walmart
Treat yourself! Save $33 on Madden 20 at Walmart and prepare for arguments with your friends and colleagues – NFL always brings out the worst in us. It's also available for PS4.View Deal

Days Gone | $20 at Walmart
One of the best PS4 exclusives of the year – and was recently lauded for its storytelling at The Golden Joystick awards – has had 50% knocked off of its price at Walmart. View Deal

Mario + Rabbids Kingdom Battle | $14.99 at Best Buy
It's one of the breakout games released so far on Nintendo Switch. It's the Ubisoft x Nintendo mashup nobody asked for but we are so, so happy that we received. $45 off, take a chance on it! View Deal

Pokemon Shield | £36.99 at Currys
Pokemon Shield is only a couple of weeks old, which is why this discount is so enticing! Get involved in the first proper Pokemon games built for Nintendo Switch at an awesome price while you can.View Deal

Call of Duty: Modern Warfare | £38.99 at Very
Call of Duty games rarely fall in price, but here we are with Very knocking a tenner off of Modern Warfare. It's proper chaos and you should absolutely take advantage of this on Xbox One and PS4. View Deal

God of War | £9.99 from Currys
Currys wants you to save £20 on one of the best PS4 games ever made. This is one hell of a killer deal; get involved with this modern classic while you still can. View Deal

Anthem |  £4.97 from Currys
Anthem has had a bit of a rough ride since it launched in January, but for a fiver it's almost worth giving it a go... right? It's well worth taking a chance, either on Xbox One or on PS4.   View Deal

Control Limited Edition | £35.04 at Amazon
Get your hands on Control, one of the best and weirdest games of the year. This is from Remedy, the team that brought you Alan Wake and Max Payne. It's also available on PS4. View Deal

Borderlands 3 | £34.99 from Amazon
Borderlands made its big comeback this year and, thanks to Amazon, you can play Borderlands 3 for just £34.99. You can also get it on Xbox One if that's more your jam!View Deal

Diablo 3 Eternal Collection | £14.99 from Amazon
Get Diablo 3, along with all of its DLC and expansions, for just £14.99? Honestly, a game this good for a price this cheap should be absolutely illegal. View Deal

The Witcher 3: Wild Hunt | £34.99 from Amazon
Save over 20% on what is arguably the best RPG of the console generation. This is an epic adventure, one that's perfectly suited to being played on the move with Nintendo Switch. View Deal