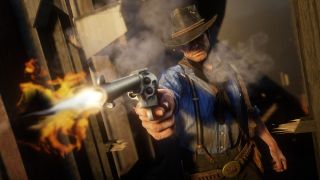 Red Dead Redemption 2 is quite a popular game (heavy sarcasm), but a big chunk of players, namely those playing it on PC, didn’t get to play the game as it released purely on PS4 or Xbox One last October. But now, thanks to some eagle-eyed Redditors, there’s the distinct possibility the game might be released on PC soon, as mention of working on Red Dead Redemption 2 for PC has been found on a physics programmer’s LinkedIn. Oops.

Specifically, under a list of their work as a programmer at Rockstar, this person lists “Red Dead Redemption 2 – PS4/XBox1 [sic] /PC”. Looks like that could be a hint that we’re going to get Red Dead Redemption 2 on PC sometime soon, meaning that everyone who didn’t get a chance to play it might now be able to explore its Western world full of horse testicles and Dutch’s misguided plans.

We have no clue when Red Dead Redemption 2 could be released on PC if this leak is real and not just a typo – it did take GTA 5 three years to make the leap from console to PC, after all – but if it does get released in 2019 there’s the possibility that that might mean it’s technically up for another round of awards. Were that the case, then Rockstar will be able to fill a pool with even more accolades, as the game took home an impressive 17 awards from 2018 - 2019. Just… wow.

If you want more cowboy content, here’s our feature on the making of Red Dead Redemption 2's incredible Mrs. Adler, or look below to see our video review of the game!