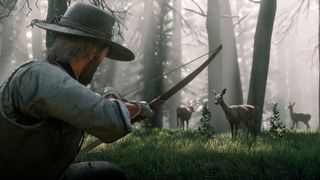 If you're looking for all of the Red Dead Redemption 2 animal locations then you've got your work cut out for you – Rockstar included such a variety of creatures in their Western that they had to create an in-game compendium so players could keep track of them all. With the game now coming to PC, there's a whole new group of hunters arriving in Red Dead Redemption 2, so we're here to act as your guide and point you in the right direction. We've got all the details you need in order to seek out these animals, then it's down to you to decide if you're just going to study them from a distance, or hunt and skin the unfortunate beasts to harvest their parts. These are tough times, after all.

We should explain that this guide isn't intended to be an exhaustive list of every Red Dead Redemption 2 animal location available, but more a suggestion of the areas you're most likely to encounter each of the creatures in question. Some of them are found in many locations, and at the end of the day they're animals so move around the place anyway – if you're struggling to find them, revisit the location later or try somewhere else. This guide just covers the general animals in the game, so if it's legendary animals you're hunting then check out our Red Dead Redemption 2 legendary animals guide or watch the video below.

Warning: Two of the animals (Booby and Parrot) have only been found during Chapter 5 in a spoilerific location, so be careful when reading on – but make sure you don't miss them when the time comes.

The bayou areas surrounding Saint Denis are teeming with alligators, so look for them along the Kamassa River and Lagras.

New Austin is the place to look for armadillos, especially around Cholla Springs and the town of Armadillo – who knew?

Badgers can be found all over the map, but are most prevalent in the area west of the Kamassa River in Lemoyne. Other good places to look are Tall Trees northeast of Aurora Basin, and the area north of Bacchus Station near Donner Falls.

The elusive bats can be found in a few specific locations – look on the north side of Aurora Basin in Tall Trees, Bolger Glade southeast of Rhodes, or the northwest side of Elysian Pool southwest of Annesburg.

Bears regularly pop up in a few locations, so try one of these but make sure you're well armed first! Tall Trees, north of Lower Montana River around the S in 'Trees' on the map; west of Wallace Station in the north of West Elizabeth; Dakota River east of Window Rock; and north of O'Creagh's Run in Grizzlies East.

To track down a beaver, look around the south side of Owanjila near Strawberry, north of Lake Isabella in west Ambarino, or along the Kamassa River directly west of Van Horn Trading Post.

If you're hunting bison, the Great Plains of Blackwater is a great place to look. You can also try along the rail line heading north through The Heartlands or the Heartland Overflow in New Hanover.

Black bears are dotted around a few locations, so take a look east of Aurora Basin in Tall Trees or along the Little Creek River to the north of West Elizabeth.

This small bird can be found in many areas, but if you're struggling to locate one then check around Caliban's Seat and along the nearby Dakota River, southwest of Valentine.

If you need to find a boar, there are concentrations of them in the area around Bolger Glade southeast of Rhodes, and Bluewater Marsh north of Saint Denis.

So far this rare bird has only been spotted in Guarma, an area you access during Chapter 5. This location is not available indefinitely, so make sure you grab one while you can.

There's no shortage of bucks around the map, but if you're still unable to find one then the area north of Rhodes, or the Cumberland Forest, should have you covered.

There are a few handy spots to look if you're seeking a bull – near Little Creek River in West Elizabeth by the word 'Little'; northeast of the Heartland Oil Fields in New Hanover; and the north end of the town in Saint Denis.

The bullfrog is another resident of marshy river areas, so look along the Kamassa River west of Saint Denis or visit Bluewater Marsh to the north.

Another small bird that's found in many locations, but search around Caliban's Seat in New Hanover or along the Dakota River to the west or south from there and you should spot one.

Chickens can be found as livestock in many towns, so if you've not already got one then take a look in Blackwater, Valentine, or east Saint Denis.