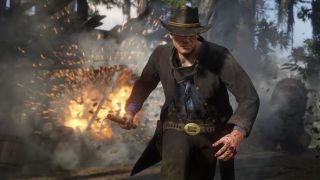 The GTA Online casino may have just opened its doors in Los Santos, but much spookier things are going on down in Rockstar's other online open world, Red Dead Online.

So far, players are used to experiencing the supernatural side of the Wild West thanks to the Red Dead Redemption 2 Mount Shann Mystery, but one cowboy exploring the game's multiplayer component has encountered something entirely unexpected.

Posting his footage on Reddit, a player by the name of TheCodeWhistler59 was roaming around the West Grizzlies when they stumbled across a pair of footprints tramping across the snow. Trouble is, the footprints didn't belong to any visible entity, instead seemingly appearing out of thin air.

Some have suggested this could be a glitch (of which Red Dead Online has been known to have its fair share), or perhaps a rabbit was merely tunnelling through the snow out of TheCodeWhistler59's viewpoint, but there's also the other, much scarier alternative...

Could ghosts be coming to Red Dead Online and, if so, in what capacity can we expect them to be appearing? We're still a few months away from Halloween just yet, but Rockstar could well be laying the foundations for a big, ghostly update to its multiplayer counterpart to Red Dead Redemption 2. Either that, or this is just a fun Easter egg that's only just been discovered by players, over six months since the game launched.

Rockstar itself has yet to offer any comment on the matter, but we'll let you know once we hear anything more, and will keep our ears to the ground for other ghostly goings on in the wild lands of New Austin and beyond.

For more, check out 17 more amazing things to find in Red Dead Redemption 2, or watch our Release Radar video below for a guide to everything else out this week.