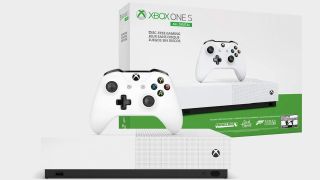 Our disc-less future comes one step closer today with pre-orders available for the Xbox One S All Digital console (which we lovingly refer to in the office as the Xbox One SAD or, alternately, the Xbox One 😢). The All-Digital Edition is completely sans optical drive, so we recommend a mighty internet connection if you're going to jump on the early adoption train, but it starts at $250 on Amazon, $50 less than the standard Xbox One S (and a full $150 less than the powerful Xbox One X). If you're as sick of swapping discs as we are, the Xbox SAD is a great way to tide yourself over until the arrival of the next generation of hardware, which we anticipate to land sometime in 2020. If you do grab one, be sure to snag some of the best Xbox One accessories to accompany it.

The All-Digital comes with a 1TB hard drive preloaded with some first-party favorites, including Sea of Thieves, Minecraft, and Forza Horizon 3 (a bit baffling that Microsoft didn't opt to include Forza Horizon 4 in lieu of its predecessor, but there we go). Its attractive white chassis looks even better unblemished by a disc drive, and the package comes with a matching white Xbox One controller.

Pre-order the Xbox One S All Digital Edition at Amazon for $249
Free yourself from the tyranny of discs with Microsoft's new all-digital console, $50 less than the MSRP for the standard Xbox One S.View Deal

An all-digital console launched near the end of a hardware cycle recalls the 'Slims' of previous generations, but instead of just shrinking the form factor, Microsoft has decided to begin the push towards a future where consoles are really just intermediaries for digital content (or, perhaps eventually, just hosts for streaming games, TV, and films). It pairs nicely with Xbox Game Pass, the subscription service that offers a library of more than 100 games for one monthly fee - including every first-party game on launch day. While its not the death knell for physical media by any stretch of the imagination, it does make those distant all-digital shores look slightly closer. For more Xbox console options, as well as peripherals and game deals, check out the family of links below.