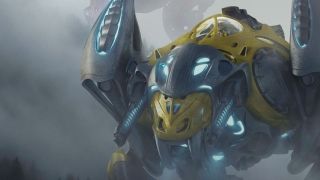 As someone who grew up during the heyday of the original Power Rangers TV show, I was sure a gritty reboot movie version couldn't possibly appeal to me. Friends, I was wrong. Today, we have our first good look at the Zords via a poster from ComicBook.com, and I am freaking out:

I mean, the movie might still turn out to be terrible, don't get me wrong - but my inner 10-year old is absolutely giddy right now. I mean look at those things! They look like monsters coming out of the fog to mix it up with Pacific Rim's Jaegers and Kaiju. Of course, it doesn't hurt that the one we see clearest is the saber-tooth tiger; my favorite from the original squad, before Tommy the Green (and later White) Ranger stole everyone's hearts.

There's only one gripe I have here, and that's the portrayal of scale. Given the size of the trees, these Zords look way bigger than they were in the show. But look closely above the saber-tooth tiger's head: we can see the Yellow Ranger in the cockpit there, and if this scale is accurate, that would make her 20 or more feet tall. My guess is the designer made the Zords look bigger for the visual impact, but once you see Giganticus Ranger there, you can't unsee it.

Directed by Dean Israelite and starring Naomi Scott, Dacre Montgomery, RJ Cyler, Ludi Lin, and Elizabeth Banks, the Power Rangers movie will be released in UK and US cinemas on March 24, 2017.