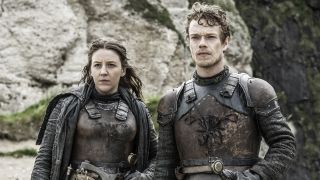 Filming of Game of Thrones season 7 continues on the northern coast of Spain – and has delivered more insight into the short-term future of major characters including Jon Snow, Tyrion Lannister, and Theon Greyjoy. (Obviously we're entering territory well north of the spoilers wall, so look away now if you're going to get all Samwell Tarly about having major plot points ruined.)

Watchers On The Wall reports that day one of this week's shoot saw Davos finally return to Dragonstone – in reality Zumaia's Itzurun beach – alongside Jon Snow, where the latter shared a formal handshake with Tyrion, AKA hand of the Queen. At this point one can assume Jon has already met Daenerys, who fans have theorised for years is his aunt.

Another busy day of #GameofThrones filming and even more images added to our photo post! https://t.co/u7PggtzVrw #SPOILERS pic.twitter.com/BkK8EBALhjOctober 24, 2016

Day two of the Itzurun shoot delivered further 'hell yes!' news, as Alfie Allen – AKA Theon Greyjoy – rocked up on set for the first time. Theon and a selection of his Ironborn fleet were filmed coming ashore to be met by Jon, Davos, Missandei, and various Dothraki.

Unsurprisingly given the manner in which Theon's treachery led to the fall of Winterfell, Greyjoy's arrival doesn't cause Jon to bust out the vino and pigeon pie. Instead, Snow grabs his former friend by the lapels, yells at him a lot, and then storms off.

Filming in Itzurun runs until this Saturday (October 29), with this selection of cast and crew already having shot scenes in Muriola and Gaztelugaxte last week. Eagle-eyed snappers reckon they've caught sight of Melisandre on set, in addition to the above characters.

Want even more season 7 goodness? As GR+ reported earlier in the week, the entire plot has already been leaked.