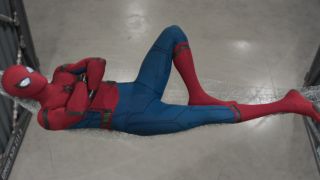 Spider-Man trilogy star Kirsten Dunst doesn't care about Spider-Man: Homecoming, and Homecoming star Tom Holland doesn't care that she doesn't care. Holland addressed Dunst's dismissive attitude toward the film in an interview with Movie'n'co UK, but before we get to what Holland thinks, here's a refresher on what Dunst originally said about Homecoming.

"We made the best ones, so who cares?" Dunst told Marie Claire. "I'm like, 'You make it all you want.' They’re just milking that cow for money. It's so obvious. You know what I mean?"

To be fair to Dunst, I don't think she was specifically calling out Holland or the rest of the cast, probably just the execs at Sony and Marvel/Disney who made the whole thing happen. And since publicly traded corporations do, in fact, exist above all else to generate profit for their shareholders I doubt they take offense. But here's the response from Holland.

"I read it and I saw it, and you know, she's entitled to her own opinion and I'm not one to judge at all," Holland began. "I definitely am not doing this movie for the money, it's a job that I think anyone would do regardless of what you were getting paid, you know? All I know is that I've had the greatest time on this movie and I've absolutely loved it, and if she doesn't want to go and see it, I don't really care. But I don't dislike her in any way for what she said, and she's entitled to her own opinion, so it's all cool."

So consider that beef pre-emptively squashed. Movie'n'co also pressed Holland a little bit on what he's most looking forward to in his Spider-Future, including an upcoming appearance in Avengers: Infinity War.

"As Infinity Wars go, I don't actually know what the plan is yet," Holland admitted "I haven't read the script. I just sort of show up and do my part. But the future is a crazy place for Spider-Man right now, we've got so many different possibilities, now that he's in the MCU we've got even more possibilities, even more villains, even more characters he can interact with, and I'm just looking forward to seeing this kid try to become an Avenger. And I think that's gonna be what audiences will love."

For more on the latest incarnation of the web-slinging wonder, read our Spider-Man Homecoming review.