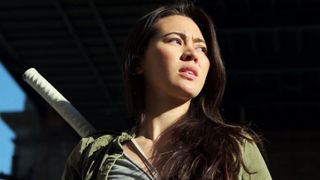 Iron Fist’s Colleen Wing (Jessica Henwick) knows all about secretive franchises. Having appeared in Star Wars: The Force Awakens and now starring in a Marvel TV show, Henwick must have seen her fair share of crazy precautions – but does Star Wars outdo Marvel for secrecy or does Iron Fist pack more of a punch in the hush-hush stakes?

Speaking to SFX Magazine for its bumper Iron Fist feature, Jessica Henwick was asked, having appeared in Game of Thrones, Star Wars and now Iron Fist, which was the most secretive: “Every time I take one of these jobs I think I’ve experienced it all in terms of secrecy, and then a new job goes and adds another level to it,” Henwick says (probably while facepalming).

Henwick, though, was able to share some juicy deets about the totally not Bond villain levels of what-the-fuckery, “On Star Wars it culminated in this four-hour session where they took my phone away and they took my bag and my coat so I had no belongings with me. They led me into this tiny room which had a safe in it, and inside the safe was one envelope, and it was sealed, and inside the envelope were my pages. The pages were red so you couldn’t photocopy them.” I don’t know about you, but I’m exhausted just reading that…

Jeez. If the comic book gig doesn’t work out, Marvel always have a future in protecting state secrets.