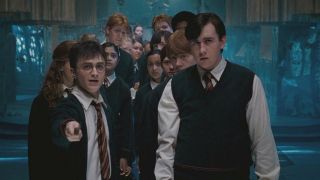 Whether you receive your bills by owl or are Muggle born, you won't want to miss this magical deal on the Complete Harry Potter 8-Film Collection on Blu-ray. It's just $27.49 on Amazon right now - that's 73% off and a discount of $72.49. You'll have to move quicker than a golden snitch to make the most of it though, as this lightning deal ends in just over five hours.

The selection of Blu-rays includes:

Harry Potter 8-Film Collection on Blu-ray |$27.49 on Amazon (a $72 saving)
Let's face it, this incredibly cheap boxset of brilliant movies about the boy wizard and his friends is the closest you're getting to an acceptance letter from Hogwarts. Cheer yourself up by reliving the adventures of Harry, Hermione and Ron. Go on, you can even wear a robe if you want. View Deal

The first movie, Harry Potter and the Sorcerer’s Stone, was released in 2001, and the final Harry Potter and the Deathly Hallows – Part 2 in 2011. Along the way we fell in love with characters like Hagrid, Dobby the House Elf, Buckbeak, and those of us with problems might even have developed an uncomfortable crush on Lucius Malfoy. (Hello to Jason Issacs.) The eight years since the last movie has done nothing to kill the power of the Potter, as those of us with crippling Harry Potter: Wizards Unite addictions can attest.

This offer is just one of the hundreds we're tracking during the retail rumpus that are the Amazon Prime Day game deals, and it's one of the best when it comes to bang for you buck. Need something to watch your new movies on? It doesn't come better than this: the 55" LG E8 4K Ultra HD TV for $1797 at Walmart. That's a saving of $1,200 for, in our own words, the best gaming TV around.