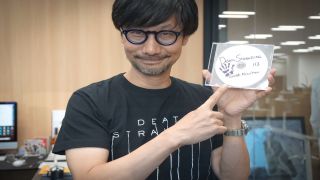 Hideo Kojima is already thinking of his Kojima Productions next project, and it could be a manga with Yoji Shinkawa, a movie, or something more bizarre than Death Stranding.

The news comes from an interview in the February 6 print edition of the Japanese magazine Famitsu, which was translated and summarized by DualShockers. Most of the five-page spread features Kojima discussing past projects, but the final question posed by the interviewed asks what kind of projects Kojima and Shinkawa would like to do next.

Their first response? A manga that the two would work on together, as Shinkawa "likes to be able to touch things directly". Kojima wants to make something with mecha to give Shinkawa the chance to design them, as Death Stranding had so few. This led to them suggesting it might be an anime project, which would take a lot of work but not nearly as much as if they were to work on another game. Kojima also made sure to remind us that he wants to make movies, including one that incorporates Shinkawa's designs.

As far as games go, Kojima Productions "is planning to work on multiple game projects, one of which would be a 'big' game". But Kojima is planning on making some smaller games, too, including episodic and digital-only titles. And funnily enough, despite the babies in snow globes, both Kojima and Shinkawa believe that Death Stranding may be "considered to a be a 'weird' game" but it's actually "very similar to what they've done in the past and they personally don't think it's weird". In fact, they want to make their games even weirder. Stay weird, Kojima.

While we didn't get many details from this Famitsu interview, it's clear that Kojima Productions has a lot of ideas swirling about its offices. Whether it's manga, anime, an episodic game series, or something weirder than Death Stranding, expect Kojima and company to deliver.

Speaking of, here's some Death Stranding tips to get you through Kojima's latest.