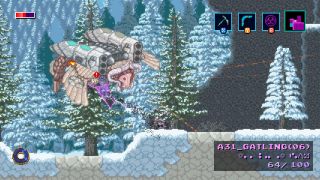 Nintendo rang in the holiday season with a big round-up of upcoming indie games, including some hotly anticipated sequels. The December 10 Nintendo Switch Indie World stream featured Axiom Verge 2 and Sports Story - the sequel to Golf Story - as well as beautiful newcomers like Gleamlight and ports of the likes of Dauntless and Oddworld: Stranger's Wrath. There's a lot to work through, so we've rounded up every game from the stream for you here.

The sequel to Golf Story is going way beyond golf. It's got tennis, dungeons, toaster ball, new mini-games, and a whole lot more judging from its trailer. If it's anything like Golf Story, this will be an unmissable sports adventure. You can find more on Sports Story here.

The streets are still angry, and there are still bad guys to be beaten up. Streets of Rage 4 looks like more of the classic brawler, but it promises new mechanics and stages that shake up the beatdown. In a nod to longtime fans, Adam Hunter, part of the original Streets of Rage's lineup, will be playable in Streets of Rage 4.

Clearly, someone's been reading my dream journal, because what we have here is a 2D platformer with a stained glass aesthetic in which players assume the role of a sword. Not the hero wielding the sword, but the sword itself. I'm in.

This baking-themed party game challenges players to compete or work together to collect, punch, and bake doughy creatures in four-player local co-op. Think Overcooked, but with bun critters.

Supermash is described as "a game that makes games," but rather than a Dreams-style approach, it's closer to Evoland. Basically, you pick two genres - JRPG, platformer, stealth, Metroidvania, etc. - and smash them together, then play through the resulting game. The premise is cool, and it'll be interesting to see how Supermash balances variety and consistency.

The Talos Principle is coming to Nintendo Switch with all the bells and whistles of its Deluxe Edition. Croteam's first-person puzzler is trippy, inventive, and surprisingly surprising, so it's nice to see it come to another platform.

If you liked the sailing in Assassin's Creed 4: Black Flag but thought you'd like it a whole lot more if it had a low-poly art style, procedurally generated maps and enemies, and it was the entire basis of the game, Sail Forth may be up your salty alley.

Surprise! Dauntless is out now on Switch, complete with cross-platform multiplayer and progression. You can find more details about the Switch port and its accompanying update here.

With music from Phoenix Wright and Viewtiful Joe composer Masakazu Sugimori, characters by Hatoful Boyfriend artist Hato Moa, a robot companion, and a mix of murder investigations and true-blue puzzles, Murder by Numbers looks like an eclectic visual novel.

Oddworld: Stranger's Wrath was originally released in 2005, so it's been retouched for its Switch release. It's split between third-person action and first-person shooting, and the kicker is that your crossbow fires live ammunition - literally tiny living creatures that do some wild stuff on impact.

SkateBIRD is exactly what it sounds like: a skateboarding game where you play as birds. If watching tiny, chubby cockatiels do kickflips and rail grinds sounds like a good time, this game is for you. If it doesn't, maybe the adorable tiny clothing will bring you on board.

Liberated is somewhere between noir graphic novel and mystery adventure. It's set in a "near-future dystopia, the eerily familiar, always-online society gives way to complete government control." Fair enough, that is eerily familiar.

Boyfriend Dungeon's premise is simple: date your weapons. That scythe? It turns into a pretty, fair-skinned boy. That dagger? She is tasty in a fight, and likes long walks on the beach. Those brass knuckles? A cat. Yes, a cat. It's a dating sim crossed with an isometric dungeon-crawler, and it looks pretty darn fun.

We didn't see much of Dreamscaper, but from its description, it's got a lot to offer. It's described as "an [action RPG roguelike] blending elements from brawlers, top-down shooters, and dungeon-crawlers," to say nothing of puzzles, NPC friendships, and the narrative underpinning it all. You play as Cassidy, a young woman grappling with depression which manifests as the nightmares you explore. Dreamscaper has a lot going on, and it looks mighty sharp.

As you may have deduced, The Survivalists is a survival crafting game set in the world of The Escapists. Gather and combine resources, command a legion of monkeys, and carve out a prosperous existence on a procedurally generated island in local and online multiplayer.

Nintendo pulled out the big guns right at the end. Axiom Verge, one of the best Metroidvanias of the decade, is getting a sequel next year. Creator Thomas Happ says it's been in development for four years already, and judging from its reveal trailer, it'll be worth the wait. The sequel has the same impeccable pixel art as the original and its music is positively bumping. Better still, it sounds like we'll finally discover the origins of the Axiom Verge universe. This is one to watch.