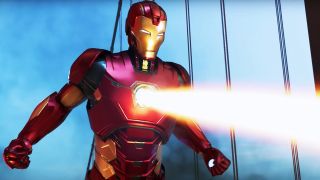 We've finally seen a tiny glimpse of Marvel's Avengers game at E3 2019, but when I say tiny, I mean tiny. While the reveal trailer briefly showed the heroes in action, developer Crystal Dynamics showed gameplay off behind-closed-doors, meaning only a select few were able to see how the 2020 release will actually play. Luckily, we were one of those lucky few, and so below you will find information on what the Marvel's Avengers gameplay looks like, including details on each of the characters' combat abilities and the scope of the mission that we were able to get our eyes on.

Broadly speaking, each Avenger has a suite of basic attacks and two special attacks, just like Kratos and his axe Leviathan (unsurprisingly, the developer who worked on the attacks in God of War is the lead combat designer for Marvel's Avengers). The mission we saw was 100% linear, with some QTEs (quick time events) and an over-the-shoulder perspective for each hero, so below you'll find a breakdown of almost everything each Avenger can do.

Thor is the first Avenger we got to see in action, and he fought off a bunch of bad guys on the partially-ruined bridge while trying to save as many civilians as possible. The God of Thunder, unsurprisingly, used Mjolnir a lot. The hammer acted similarly to Kratos' Leviathan, so it could pin enemies in place against walls, be thrown, and be called back to Thor's hand, hitting anything in its path. Yup, that is uncannily similar to how Leviathan worked, but maybe that shouldn't be too much of a surprise as that's how Mjonir works in the movies too.

Thor had an area-of-effect attack that involved smashing Mjolnir on the ground, which sent any enemies flying in a burst of electricity (I'm not entirely sure what his second major ability is at this point), and there was the occasional QTE where he had to lift up vehicles to give civilians a chance to flee to safety. Lightning flew around liberally, but before we had a chance to get too used to seeing Thor do his stuff, Ironman took over the action.

"Are we just a danger to society and we don’t know it?": Marvel's Avengers game is going to be about our favourite heroes at their lowest point

Tony Stark/Ironman was as witty as ever, with most of his combat being of the aerial variety. Just like in the movies, his main attacks were his hand cannons, blasting enemies out of the way both on the ground and in mid-air. He could hover in the air as well as fight on foot on the ruined bridge, plus the hero was also able to blast and fly at the same time, as during the gameplay demo there was a chase sequence which had you pursuing more guys in jetpacks and firing from your hand cannon as you speed along, as well as dodging out of the way of their projectiles.

One of his ultimate attacks was having a powerful laser burst forth from his arc reactor, which was devastating enough to burn its way right through tanks. To be honest Ironman's gameplay wasn't that interesting, as he didn't seem to have nearly as much variation in his attacks as someone like Hulk. Speaking of Bruce Banner's alter-ego, once Ironman was done wrecking everything in his path, we got to see Hulk in action.

Bruce Banner transformed into the Hulk mid-jump when he leaps from a ship piloted by Black Widow onto the bridge below, and at the moment the big green dude looks like the most fun to play. Hulk definitely likes to smash things up, and unlike the other Avengers he had a special way of making his way from point A to point B: jumping way up high, and grabbing onto nearby trucks/buildings to create makeshift handholds. Picture a small but stronger version of King Kong making his way up the Empire State Building, and you've got the right idea.

Hilariously, Hulk's weapons weren't just his fists: like in Marvel's The Avengers movie, he actually used enemies as weapons. I'm betting this is one of his ultimate attacks, as it was only used once in the gameplay demonstration. Basically, Hulk picked up one unlucky fellow by his legs, then swung him around to knock other foes out of the way before smashing the guy into the concrete repeatedly. Come to think of it, it was almost identical to when Hulk attacked Loki in the 2012 movie. Hulk also has another ultimate attack where he claps his hands together to create what looks like a sonic boom that blows everything nearby out of the way. Oh, and there was also the odd QTE where he destroys a tank with another tank. Not bad, green guy, not bad at all.

At this point the gameplay switched to focus on Captain America – i.e. Steve Rogers – who was in the helicarrier trying to stop the whole thing from exploding. Like Ironman, his attacks were familiar to anyone who's seen the movies: the Cap's shield bounced between enemies and could be recalled and thrown like Mjolnir. And Kratos' axe. Ahem. Seeing a pattern here?

Apart from the obvious shield combat, Captain America could throw enemies above him and punch/kick their lights out mid-air, and protected himself from most damage by bringing up his shield in front of his face. I'm afraid that's as much of his combat that we got to see in action before the focus shifted to Black Widow, who was hunting down the demo's big bad guy, Taskmaster.

Natasha Romanova (Romanoff if you're using the MCU spelling), or Black Widow, is probably going to feel the most familiar to players as her gameplay was based around firearms in a fairly traditional third-person fashion, as seen in games like Days Gone, Fortnite, Red Dead Redemption 2… you get the idea. What we saw of Black Widow during the Marvel's Avengers gameplay demonstration was based around her mini-boss battle with Taskmaster. To start off, there were a handful of QTEs at the beginning to avoid falling debris (when she was on Taskmaster's back as he flew around with his jetpack, trying to get a detonator from his hands).

You can't play the Marvel Avengers campaign with your friends, it's single-player only

During her fight with the villain the assassin wielded dual pistols and evaded attacks rather than blocking them like the other Avengers, so she did a lot of rolling and gymnastic backflips to dodge damage. To really deal out some serious damage, Black Widow got up close and personal, meaning she was then able to chain together a flurry of punches and kicks in quick succession. Right at the end of the gameplay demonstration her ultimate attacks seemed to be the ability to temporarily fight while invisible (meaning that Taskmaster couldn't counter any of her attacks) and mega-charge one punch with electricity as a finisher move.

Overall, Marvel's Avengers looks like it still needs to convince players how it's different from the MCU, and why that's a good thing. With no extended footage of gameplay having been released to the public - yet - it's time to let people make their own decisions about the gameplay as it's (understandably) a question on a lot of people's minds. Having seen it at E3, it feels like it could be a fun game to play, although as the explosion on the helicarrier is going to kick off the Avenger's identity crisis, I definitely got the impression that we were being shown a level from fairly early in the game, perhaps even the tutorial. So I'm curious to see what Marvel's Avengers gameplay looks like a couple of hours into the game, as at the moment it looks… fine. Hopefully we'll get more details about the game soon, as well as some footage of its heroes in action to win us over, because it feels like that's what Marvel's Avengers needs right now to convince fans it's the Marvel game they've always wanted.

So, that's what Marvel's Avengers game actually plays like from what we've seen of the gameplay so far. If you want to know more about the game here's how its combat designer from God of War is building better superheroes, or look below to watch our preview of the game!