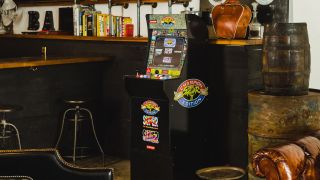 If arcade machines from the early 1990s are enough to send you into a nostalgic daydream, don't miss this deal. The Street Fighter 2 Arcade Machine by Arcade1Up currently has $55 knocked off its price in preparation for the Black Friday game deals, making it $244.99 instead of $299. And don't panic about not having room - it's just over 4 foot tall. It also includes the same joysticks and buttons from the original, so this may as well be a time-capsule for fans of the Capcom series. Hadouken!

That's par for the course when it comes to Arcade1Up, though. They're well known for their recreations of beloved cabinets, and that range includes a recreation of smash-hits from Marvel, Star Wars, Mortal Kombat, and beyond. As such, we don't have any trouble recommending this particular unit.

This is just the first in a long line of bargains heading your way this November. For instance, the Black Friday TV deals will begin soon, the Harry Potter Blu-ray series is on offer for just $40, and certain gaming PCs are going down in price. Essentially, keep an eye on GamesRadar+ over the next few weeks if you'd like to save yourself some money.