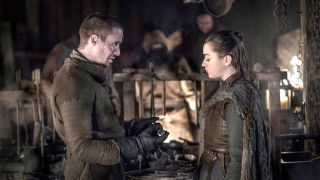 Preparation was the word in Game of Thrones season 8's second episode: preparing to die (this is Thrones after all), but also preparing to fight. Arya knows a thing or two about how to effectively kill things, and we saw her use that expertise to put in a custom order with Gendry for her very own dragonglass armament. Her blueprint was only briefly visible in the show, but now HBO has revealed both its initial design and final production on the official blog for Making Game of Thrones. Here it is:

Arya's ice-zombie killin' weapon of choice is a relatively short, double sided spear. She must've been playing Bloodborne or something, because this weapon has a trick: one of its blades seems to be detachable, yielding both a dragonglass dagger and a shorter spear. It's a practical choice: we've seen how well Arya can fight with a dagger and other close-quarters weaponry, but you do want to keep some distance between yourself and a zombie whenever possible. This way, she gets the best of both worlds.

In fact, this weapon is likely the one we see Arya swinging about in the first full Game of Thrones season 8 trailer. The scene lasts about a half second and is quite dark, so here's a brightened screencap.

If I was going to give Arya's new spear some D&D stats - I'm sorry, I can't help it, this is just the way my brain processes fantasy weaponry - I'd say it probably does a D8/D10 of piercing damage with the Finesse, Versatile, and Special properties. In this case, Special denotes its ability to be split into a dagger and one-sided spear, enabling instant Two-Weapon Fighting but disabling the Versatile property that allows for increased damage when wielded in two hands. I'd hesitate to give it Reach for extra range since it was custom-made for Our Lady of Smolness Arya Stark, however undead creatures would be vulnerable to attacks made with dragonglass/Valyrian steel weaponry and thus take double damage.

Hey, maybe I'm going overboard here, but you could totally roll up your own Thrones adventure with our guide to the best tabletop RPGs. Or you could catch up on the latest episode with our video recap.