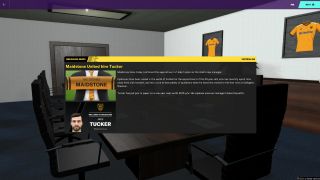 The Football Manager 2020 best teams to manage list is essential, particularly if you're a West Ham fan locked in the eternal torment of supporting an alright team until the end of time. One of the best things about real football is the way it shifts and changes, with empires crumbling to dust and some clubs achieving the impossible. It’s the same in Football Manager 2020. Playing as your real-life club often leads to a sub-par experience: there’s little so painful as having to free transfer your favourite forward after suffering an attack of the Bentekes. Our FM 2020 best teams to manage guide ensures you avoid such crushing fates, with unique challenges and situations presented across all of these clubs.

I know, I know - Manchester United are one of the most famous teams in the world, but they're also a shadow of their former selves - when the biggest challenge they had was where they were going to fit their growing silverware collection, while also trying to spend their tremendous transfer budget.

Those times are over. Managers looking to take the reigns at the Red Devils from Ole Gunnar Solskjær have their work cut out in having to cut the deadwood from the roster and trying to reshape the team into something that can take on Liverpool and City for the title. Be warned, it isn’t a quick process. But a challenge? It’s most certainly that.

Taking a team from the bottom to the top is one of the best ways to play Football Manager. I've done this several times, and usually, I play a team with some sort of personal connection from the lower league and take them all the way up.

Along the way, you experience football with literally no budget, signing your entire team up for full-time contracts, giving them player numbers and - for the truly committed - ultimately having a crack at Europe. By this point you’re ten years into the future, every player you recognise has retired, and your director of Football is an aged Jack Wilshere who seems to take an ungodly number of sick days. Despite that, it’s ace.

The connection? Maidstone United are the closest low-league team to Folkestone, where I grew up. For you, the challenge could be that Maidstone need a bit of a push: after a back-to-back run of promotions, they hit a bit of a block in the Vanaman National and finished dead last. It’s the perfect time for a new face in the dugout. Yes, you.

A university team? Oh yes. Back in July, Cardiff Met went to Europe, making them the first British university to field a men's football team in a European Competition. They were knocked out off the Europa League by Progres Niederkorn on the stupid away goals rule, but that doesn't have to be the case for you.

There are problems. This is literally a university team, so they are hardcoded into the game as an amateur outfit and you're going to have trouble both recruiting players and keeping them for longer than a couple of seasons. However, two seasons is all you need if you want to get some success in Europe and maybe, just maybe, win the Cymru Premier.

No word on whether your time as a University sports coach will end up inspiring a bunch of people to get what they truly want from life, but victory in Football Manager is often its own reward, especially when the odds are as long as Cardiff Met's.

This season, Footballing unknowns Rodez have emerged blinking into France's Ligue 2 for the first time in 26 years. Which is impressive AF. This is the highest they've ever been in France's footballing hierarchy, meaning they have all the "small club" trappings: a fairly average team and a stadium that can fit in 6,000 people, if everyone budges up a bit.

It's only a short throw to the French top flight in Ligue 1, so this gives you the rags-to-riches story in only a couple of seasons, making them a must-play for managers with an eye for a cracking story and no time to spare.

Germany's number two squad provides one of the most immediately fun experiences with just a twist of challenge. Dortmund's immediate goal is to batter Bayern Munich and win the Bundesliga, and they've got the stones to handle it.

New signings Julian Brandt, Thorgan Hazard (Eden's brother), Mats Hummels and Nico Shulz could make a team by themselves, but they're actually adding depth to a squad that already has Marco Reus and the somewhat prodigal Jadon Sancho, who has netted 18 goals and 31 assists since he joined the club in 2017.

Add in the fact the company are already playing European football, and you can see why this outfit is one of the most fun to get stuck into with FM 2020.

Zagreb's domestic league isn't the most interesting, despite Croatia's surprising success in the 2018 World Cup, but the draw here is the team's Champions League football this season.

Dinamo Zagreb is performing well recently and has caught the eye of some serious names. However, they're a team with heaps of talent and little experience, meaning just a little push one way or the other can transform the club’s future.

A few smart decisions can set Zagreb up as the team to beat in Croatia, making this an attractive role for managers looking to build a legacy, with glory and some big-name talent awaiting a prestigious finish in the Champions League.

Holland’s best side might have lost De Jong and De Ligt, but Ajax is worth a save for the strength of their world-class team and stellar youth academy. Again, domestic football isn't really the draw here. The challenge is making themselves a dominant force the world over, something that has eluded the team over the last few years.

Winning in Europe takes a little work: they don't have the money of some of the bigger clubs in the Champions League, but their name and legacy still tempts some huge names to the team if you play it right.

For a good time, not a long time, a Shanghai SIPG save will give you immediate access to Hulk, Oscar and Marko Arnautovic from the get go.

I like to play Chinese Super League saves like a fast car: I spend a few years here buying and selling players while I watch how things go in Europe, and when the cash reserves are dry or my key players start to hang up their boots, I skip town and go back to Europe and play in a new and interesting league.

China's strength on the football pitch largely revolves around how much money they can bring to bear, and it becomes a fun case of building your dream team before you jack it in and head off to pastures new. Right, Harry?