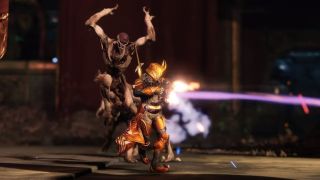 The Destiny 2 Season of Opulence roadmap is ticking along. The next major content drop is Menagerie Heroic mode, which is due out Tuesday, June 25. As Bungie revealed in a blog post today, the Heroic mode of the six-player activity will raise the stakes in several ways.

For starters, Menagerie Heroic will be 770 Power, a full 20 Power levels above the current cap of 750. Heroic enemies will start at 750 and scale up throughout the activity, so you can bet the "worthier" enemies that Calus summons will be tough to deal with, especially in the boss room.

On top of a higher Power level, Heroic mode will also feature proper game overs. The Extinguish modifier will always be active, so if your entire team dies at any point, you'll be sent to orbit and you'll have to restart the activity. Ouch. You'll also be kicked to orbit "if you fail to reach 100% progress toward the boss after completing each encounter once," Bungie said. In other words, it's OK to time out on a few encounters in Heroic mode, but if you don't earn enough boss progress, you'll eventually run out of encounters and fail the Menagerie.

In addition to this, Menagerie Heroic will still feature weekly gameplay modifiers like elemental singes, Blackout, and Grounded. Finally, and perhaps most importantly, the Heroic version of the activity will not support matchmaking. You'll need to build your own team of six before launching Heroic mode, and understandably so. This doesn't sound like the kind of thing an average team of six randos could pull off, even if they were all at 750 Power.

Completing Menagerie Heroic mode will net you new rewards and Triumphs, which will progress the seasonal Shadow title and provide Imperials for your Chalice of Opulence. It'll be interesting to see if new guns or armor will be exclusive to Heroic mode, and whether the upcoming Lumina / Rose Exotic quest ties into it.

Master the Menagerie with our guide to the Destiny 2 Menagerie rune combos.