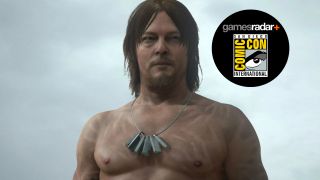 Kojima's been talking about Death Stranding at San Diego Comic Con and apart from Ludens' origins and a new Kojima Production logo trailer,  it sounds like it's all super early prototype days for whatever the game ends up being.

This is what Kojima said in a livestream,  which I'm going to put up in full for clarity. Key points: the trailer wasn't in-engine, there's no real script yet and its all sounding like a rough concept stage:

"Right now we’re making several tests. We almost have the engine. The teaser was something we did through experiments through visuals. Aside from that, in a different engine we’re doing tests for gameplay. The teaser, it is a cutscene, but when you stop it you can move the camera around and walk inside Death Stranding so it rendered in real time.

I was trying to come up with what kind of world we would be able to visually express. And also, at the same time, I had my concerns of how many of the gaming elements we would be able to put in there. It’s looking like it’s coming together. We’re reaching a point where I can see where this is going, so we’re just about to settle on an engine and from there start fully on development. And that scene will be in the game.

I’m working on the plot. I’m doing tests. I’m trying to figure out what the settings for what the story will be; some character design. [I] was about to say something [I] shouldn’t say. I don’t have the script quite just yet. I’m in a preliminary stage of the script because there are elements that I don’t know yet how much I will be able to put in there. I’m not working on the details, on the specifics yet. No dialogue yet, the plot... there’s no real plot. I’m working on the setting and what things will be be. Day on day they keep changing. The terminology keeps changing. So let’s say in the plot we have scene where a tsunami comes and takes away the city - and by the way there’s no scene like this in the game - I’m trying to figure out technologically how big a tsunami we can make, we can render. How much city I can make and be washed away. The speed of processing. These are the kind of tests we have to do before we know can make scene like that".

Now, that doesn't mean it won't be brilliant eventually, but if you're thinking that an amazing game already exists the you're being optimistic. There are some ideas, the rest is going to take time.