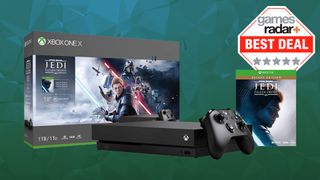 Looking for a cheap Xbox One X deal? You're in luck. Best Buy has slashed the price of the console with Star Wars Jedi: Fallen Order to $349.99, a drop of $150 from the MSRP. That's not bad going for the 4K-ready console and one of the best games of 2019.

Although this cheap Xbox bundle is the headliner, it's not the only cheap Xbox One X deal out there. Over at Amazon, you can also get the One X bundled with NBA 2K20 also for $349.99 or plump for the excellent Gear 5 bundle for the same, $349.90 price tag.

A great, genuinely low price for a premium console with new-ish games. Stunning value all around. On top of those essentials in the bundles, they all come with one month of Xbox Live Gold and a one month trial of Xbox Game Pass, the latter of which will give you access to hundreds of games across recent releases and the historic Xbox back catalog. And you can enjoy that in fabulous 4K resolutions and with the excellently vivid colors and contrasts through HDR.

Xbox One X 1TB + Star Wars Jedi: Fallen Order | $349.99 at Best Buy (save $150)
Getting one of the best games of recent months in this bundle makes this incredible value for money.
View Deal

Xbox One X 1TB Gears 5 Limited Edition bundle | $349.99 at Amazon (save $150)
It's rare you see a limited edition console for the smae price as 'normal' ones so this is a proper treat. (The regular version of the console with the Gears games is also at the same price.)View Deal

The 4K and HDR glory that the Xbox One X offers is killer. It's the best way to enjoy a host of blockbuster games, particularly on one of the best gaming TVs.

If you want to see what's going on with the offers on both the premium home consoles from Sony and Microsoft at the moment, then head on over to our cheap PS4 Pro deals guide and our best Xbox One X deals guide right now.