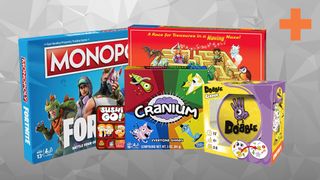 There are a load of board games for kids out there, but the hard part can be knowing where to start; tabletop games for a younger audience need to be fun, straightforward, short, and oh-so repeatable that you won't want to tear your eyeballs out after a few tries. Luckily enough, that's where GamesRadar+ comes in. No matter whether you want a game for a lazy evening at home or something to take with you on the road, we've rounded up what we feel are the very best board games for children and their grown-ups (you'll more than likely be getting involved too, after all). Some even include their favorite franchises, ranging from the ever-reliable Fortnite to Harry Potter. Happily, many of these will be available for less during the Black Friday board game deals.

Best board games for adults
If you'd like some tabletop fun of your own, be sure to check out these recommendations. They're ideal for parties, family get-togethers, and beyond. Don't miss the best tabletop RPGs, either!

These games aren't all competitive, either. We've been sure to include a few of the best cooperative board games here as well in case you're looking for a more collaborative atmosphere. Basically, we've tried to make sure there's something for everyone in this guide - be it a portable distraction for when you're out and about, board games for 2 players, or a suitable alternative for younger children, our list of board games for kids has got you covered.

You'll also find a bargain or two below to save you money along the way. Board games can be expensive, so we've tried to flag up as many deals and discounts as we could. These prices are updated on a regular basis, so be sure to pop back every now and then if you don't see any tempting offers right now.

An all-round great game for all ages of kids

$13.99
View at Amazon
$55.89
View at Amazon
See all prices (3 found)
Short bursts of energetic team fun
Easy to set-up
Caters for most ages
Requires confidence to play at its best

Some games are best played in teams - if only so you have someone to blame for losing. In Cranium, up to four teams compete to reach the finish line first by completing tasks related to word play, puzzle solving, sculpting or acting, depending on which space you land on. Some variants of the game add special spaces that allow you to move at twice your normal speed and random dice rolls that add some unpredictability to the game, but the real fun is in correctly guessing that a teammate is acting out being a gorilla, or in watching a rival team completely fail to name a country beginning with B before the time runs out.

Best for… Families looking to be competitively creative.

The best card-based game for kids

$8.95
View at Amazon
$16.01
View at Amazon
See all prices (3 found)
Extremely fast-paced fun
A goal that is easy to grasp but difficult to attain
Takes a game or two to get into

In Sushi Go players complete to make the best meal of sushi from the cards in front of them, with certain card combinations worth more than others. The trick is that players must pass their hands to the next player every single turn, so you never really know which dishes you’ll be able to choose from next. Special rules around puddings and chopsticks mean you have to be slightly more strategic - but as always the real fun of the game is in stealing the last card your opponent needs to complete a high-scoring meal (and then rubbing it in their face).

If you don't play the actual game enough...

$23.99
View at Amazon
Clever recreation of Fortnite’s urgency
Faster paced take on classic Monopoly
27 player tokens ensure everyone gets to play as a favourite
Players who are out early may have to wait a while

Each new version of Monopoly has its own quirks - but Fortnite Monopoly is among the most radical. Rather than focusing on acquiring wealth to build properties, this version of Monopoly instead has players compete for health points in a desperate attempt to outlast other players and avoid the ongoing storm - just like the game it’s based on. The board and tokens are modelled after the locations and avatars from the battle royale smash hit, while also being somewhat streamlined to cut down on the length of each game. While purchasing locations adds some of the strategy of the classic version, this is a fun blend of both Monopoly and Fortnite that has strengths of both.

Best for... Anyone who loves Fortnite.

A great game of strategy for kids

Labyrinth is a game of highs and lows, of celebration and frustration. Each player is tasked with collecting treasures from each corner of the board by travelling along paths set by moveable tiles. The challenge is in moving each tile to provide a continuous path to your goal, while preventing your opponents from doing the same. It’s all too easy to get trapped with no obvious way forward, while the other players zip around the board unimpeded - but the tables can turn extremely quickly. It’s a quick and easy game to grasp, with simple objectives - and a lot of emotion.

Best for... quick board game sessions.

A great way to experience the Potter-verse

$39.95
View at Amazon
Great use of the license
Adds some clever wrinkles to the base game
Quite easy to understand
Trial-and-error gameplay can infuriate as well as entertain

This version of the mystery solving board game makes good use of the Harry Potter license to explain away its differences from the original. An addition dice roll can alter the layout of the board, preventing a rival player from using a vital shortcut or allowing the player to gain help from a deck of useful cards. The guesswork and trial-and-error nature of original Clue/Cluedo can still be frustrating, but the additions to the formula do a lot to streamline the process and make players feel part of the Harry Potter universe as a result.

Best for... younger Potter fans looking for a new experience.

The easiest game for kids

$14.73
View at Amazon
$21.15
View at Amazon
See all prices (3 found)
Suitable for gamers of all ages
Fast-paced, short games for any occasion
Can become repetitive

A faster-paced, more involved version of Snap, Dobble is a frenetic and competitive race to see who can match pictures first. Each card in a player’s hand shows a selection of symbols - a bomb, a snowflake, a carrot etc. - which means it’s not as simple as watching for a single thing to match. Slamming a card down and shouting the matching symbol just before an opponent does the same is ridiculously satisfying, and about as easy to understand as an objective as possible. The standard game also comes with variants on the core game, so there’s more to do with the deck than just play multiple-choice Snap.

Best for... Quick gaming sessions with kids of all ages.