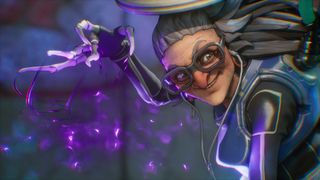 With the Bleeding Edge beta starting in just a few days, Ninja Theory has kicked off a series of developer videos. In this debut dev diary, product manager Fran Mead and creative director Rahn Tucker discuss a variety of topics related to the colorful, team-based brawler.

Though Overwatch is often used as the closest comparison to Bleeding Edge, Tucker revealed that the project’s roots are actually in MOBAs. “Overwatch is a great game, we love playing Overwatch,” she said, but “Bleeding Edge had its roots in more like a MOBA.” Tucker depicts a very different-looking Bleeding Edge with “towers and minions and lanes” but said the game took on a new shape during development, eventually resulting in the brash, third-person, melee-heavy game we know today.

The video also teases some of the modifications players can perform on their chosen characters in order to fit their play style, like damage, stealth, healing, and other focuses. When it comes to customization, players likely expect microtransactions, but Tucker assured players there are “absolutely none right now.” She added that they will never add anything to the game that will disrupt the competitive balance or make it pay-to-win.

She did mention some cosmetics are available as pre-order bonuses but did not go so far as to confirm an in-game cosmetics store is planned for later - though that’s been the recent trend, so we would expect to see one eventually. Bleeding Edge hits Steam, Windows 10, and Xbox One on March 24, and it will launch directly into Xbox Game Pass for console and PC.

Hoping to play ahead of launch? There are three ways to get in on the Bleeding Edge beta.