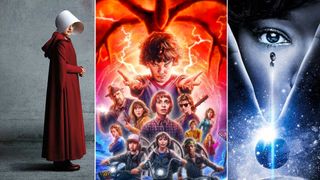 2017 has been a great year for TV. Netflix TV has really pushed hard on its original series’, producing (and licensing) a wealth of shows that cater for almost all tastes. Meanwhile, we had the thrilling, penultimate season of Game of Thrones, CBS reinvented Star Trek for a modern generation, and Twin Peaks returned after more than two and a half decades. There’s such a breadth of TV this year, all occupying new and exciting genres, making it tough to narrow our list down to the 20 best shows of the year. What follows are our picks of the finest TV 2017 had to offer - the stuff we ourselves watched and loved. So, you won’t necessarily see soaps or bake-off in here, but the stuff you’d expect to read about on GR, like sci-fi, action, and a few hints of dark comedy. These are the shows you should’ve binged during the last 12 months, and where you can find them if you’re looking for some quality new TV.

What is it? Created by and starring Seth MacFarlane (of Family Guy fame), The Orville is a mix of spoof and homage to the Star Trek television series of old.

Why should you watch it? While at first it might seem like MacFarlane - known for supremely dirty and sometimes mean-spirited humor - is making fun of the beloved Star Trek, it becomes clear (after a relatively weak first two episodes) that nothing could be further from the truth. There are jokes, to be sure, but they're always executed within the framework of Trek-style sci-fi, never at it. MacFarlane and his crew quickly establish themselves and settle into their characters' personalities, making banter believable and fun. If Discovery took Star Trek to a darker place than it's ever been before, The Orville goes to the polar opposite, and is excellent for it. Sam Prell

What is it? Jessica Biel stars in this fantastic, self-contained, thriller series, which Netflix released with very little fanfare.

Why should you watch it? The reason why Netflix really didn’t shout about The Sinner is that it’s very hard to talk about without ruining it entirely. What little I can tell you is that Biel plays a mother who has a very public, and bloody, mental break down. The rest of the series takes you on a journey to find out why, but the story delivers so many twists and turns that every episode leaves you with more questions than it does answers. Stick with it, because the eventual conclusion makes for a resolution that will have The Sinner going down as one of the best thriller series for decades. Sam Loveridge

What is it? The charming story behind the real-world '80s show Gorgeous Ladies of Wrestling - aka GLOW - chronicling how the over-the-top, all-women wrestling league came to be.

Why should you watch it? GLOW does for pro wrestling what Orange is the New Black did for prison drama, following a cast full of multifaceted women and the often hilarious, sometimes heart-wrenching paths they take on the journey to their own kind of stardom. Alison Brie shines as Ruth Wilder, the overlooked actress who uses wrestling to show her range; her dogged determination to excel even when her private life is in shambles is just so damn inspiring. The rest of the misfits who find empowerment in GLOW (even when wrestling as comically stereotypical personas) are just as lovable, from gentle giant Carmen to the standoffish Sheila the She-wolf. Marc Maron is also great in a supporting role as a crass, self-loathing director with absolutely no filter. Whether or not you already have an affinity for the theatrics and showwomanship of wrestling, GLOW will make you a fan with its funny, fascinatingly flawed characters, body-positive action setpieces, and radical '80s vibes. Lucas Sullivan

What is it? Set up as a prequel to Robert Louis Stevenson's Treasure Island, the final season of this pirate adventure wraps up the stories of Captain Flint, Anne Bonny and John Silver on their quest for fame and fortune. Mainly fortune.

Why should you watch it? Have you ever thought ‘Hey being a pirate was probably pretty cool?’ Of course you have, you’re a human. Turns out it was cool, but only if you were a captain, didn’t get scurvy or yellow fever or malaria, and managed not to lose a limb in battle. Regardless, watch Black Sails from the very beginning and you’ll instantly find a swashbuckler to root for (shotgun Rackham!) as they try to live the pirate life while battling the Royal Navy for control of the pirate haven of Nassau. The cinematography is up there with anything you’ll see in Game of Thrones and the cast is speculator throughout all 4 seasons. Featuring some of the best naval battles you’ll see away from the cinema screen, and tales based on real pirates, if you’ve got even a passing interest in what it might have been like to sail the high seas then this show is for you. Also rum. Probably helps if you like rum. James Jarvis

What is it: Eleanor Shellstrop is dead, but the story of her afterlife is just starting. Froyo shops, lavish parties, and even flying lessons make The Good Place seem like paradise. But Eleanor most definitely does not belong in The Good Place, and thus, she begins her adventures of becoming a better person alongside her supposed soulmate and ethics professor Chidi, rich (and beautiful) humanitarian Tahani, and Jason- a dopey criminal from Florida pretending to be a Buddhist monk.

Why should you watch it? Well first of all, you shouldn't see S2 without watching season 1 first. Without spoiling too much, the whole thing will make way more sense if you're caught up on what happened in the first 13 episodes. Thankfully, everything... well, good about The Good Place season 1 is true of The Good Place season 2: it's an incredibly smart show with well-written characters that never devolves into cheap sitcom laughs and consistently surprises its audience. Kristen Bell brings an excellent mix of vulnerability and cockiness to Eleanor, while Ted Danson's performance as Michael only gets better the more you watch it. The fact these people (and immortal beings) are constantly talking about ethics provide a comfortable ‘lesson of the week’ framework without it feeling forced, and the laughs are plentiful. Oh, and since they're all in The Good Place, they can't swear. It's forking brilliant. Sam Prell

What is it: The impossible, 26-year delayed, third season of David Lynch's game-changing supernatural horror / mystery / drama / comedy / purveyor of richly indefinable weirdness, this time telling a bigger, country-spanning story as it (somewhat) attempts to tie up nearly three decades of loose ends.

Why should you watch it? Because even after 26 years, it was worth the wait. Slower, darker, more complex, and at times more inscrutable than the show's first two seasons ever were, this might not be exactly the Twin Peaks you were expecting, but it's the right one. A vast, 18-hour tale spanning multiple states, several different points of view, a bunch of different planes of reality, a raft of different time periods, and at least three separate versions of the same character, to call this an ambitious show is a laughable understatement. To call it one of the most distinct, refined, deliberate and complete pieces of work Lynch has ever crafted is entirely accurate. David Houghton

What is it? Adult Swim’s cult-hit turned smash-success of an adult animation series, chronicling the adventures of brilliant but tortured inventor Rick Sanchez and his hopelessly naive grandson/sidekick, Morty.

Why should you watch it? Let’s address the giant, Szechuan Sauce flavoured elephant in the room first. 2017 was the year we learned that, yes, Rick and Morty has a fanbase problem, but you shouldn’t let that dissuade you from watching some of the best adult animation this side of the multiverse. Like Rick himself, the third season of Dan Harmon and Justin Roiland’s wildly inventive brainchild was an unbridled splurge of creativity, resulting in only a few missed marks (Vindicators 3) amongst an array of instant classics (Pickle Rick, Morty’s Mindblowers). The visual gags and sci-fi inspired conceits have never been better, but it’s Harmon’s tact for drawing emotional sincerity from an existentialist worldview that remains the most fascinating part of it all. Yes, Pickle Rick, you’re hilarious, but depressed human Rick is the character study which keeps me coming back. Alex Avard

What is it: An adaptation that moves the moms and murder story of Liane Moriarty's Australian novel to the rich, neurotic community of Monterey, California.

Why should you watch it: The writing is tighter than a pilates teacher's buttcheeks and the cast is a line-up of seriously badass actors. The tension winds up slowly with each episode until, by the final few moments, you'll be gripping a bottle of merlot and wondering if you've developed an actual heart condition. Reese Witherspoon, Nicole Kidman, Shailene Woodley, Zoe Kravitz and Laura Dern give us characters that are all flawed, powerful, broken and wonderful in their own ways, and make what could have been a throwaway melodrama a powerful story of sisterhood and secrets. Rachel Weber

What is it: The third and final season of Doctor Who for Peter Capaldi, the first with a companion of his own, and the strongest consistent series the show has had in a good many years.

Why should you watch it? Despite being a fantastic actor and a perfect choice for the Doctor, Capaldi's run came in for relentless flack during its first two years. But now finally - tragically, given Capaldi's Christmas Day departure - it's evident that the problem was never the Doctor himself, but simply the show's central relationship. In Bill, Doctor Who has its freshest, warmest, and most smartly human companion in a very long time, and one who creates absolute magic through her relationship with the Doctor. The first companion written specifically for Capaldi, she transforms the show with down-to-Earth intelligence and a respectful, loving, but no-bullshit dynamic. Coupled with a serious number of heavy, stand-out stories and arcs, this most potent, character-driven, and affecting series might be the best Doctor Who has been since peak-Tennant. David Houghton

What is it? The latest series of Charlie Brooker’s terrifying plausible sci-fi short stories offers alternative looks on social media, virtual reality, and even bees.

Why should you watch it? While the first two seasons of Black Mirror only gave us four episodes each, season 3 hands us eight deliciously horrifying, self-contained episodes. In the usual Brooker fashion, this run takes the hot tech topics of 2017 and twists them until they present a very dark future indeed. Whether it’s corrupted bee drones, the most realistic VR game yet, an alternate way to die, or even hacker blackmail, there’s plenty of content to get your grey matter working overtime. Let’s hope the future isn’t quite as bleak as Brooker’s mind. Sam Loveridge