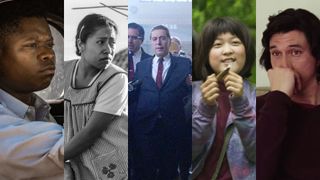 In the past, even the best Netflix Original movies would always come with a caveat. It wouldn’t quite be proper cinema, some would protest. And it’s only Netflix. Over the past few years, however – and with a Best Picture Oscar under its belt for Roma – the streaming service has suddenly become home to some of the most engaging, heart-wrenching, and creatively invigorating movies around.

Our celebration of the 25 best Netflix Original movies aims to capture that spirit. Here are some of the biggest and best movies you can find on Netflix, including those looking to stake a claim come Oscars season: The Irishman, Marriage Story, and more all feature across the next three pages.

So, if your watchlist is looking a little sparse, or you just want to avoid the FOMO by finally watching some of the best Netflix Original movies that your friends, family, and co-workers have been bugging you to try instead of putting on Friends for the 1000th time, you can now do so. No excuses.

The movie: Bandersnatch follows the trials and tribulations of Stefan, a young computer programmer attempting to adapt Bandersnatch, a choose-your-own adventure novel, into a video game. Things don’t quite go to plan, and, depending on the viewer’s choices, Stefan falls deeper into despair amid strained tensions with his father and the various employees of game developer Tuckersoft.

Why you should watch it: Long before Black Mirror season 5 warned us of the dangers of pop stardom and polar bears, Bandersnatch wowed us with an utterly compelling choose-your-own-adventure story. Sugar Puffs or corn flakes? Should you kill your dad? To jump or not to jump? The extra layer of interactivity, when coupled with the anthology series’ trademark treatise on the terror of technology, will have you maddeningly trying to find and hunt down every ending and permutation. Not many Netflix Original movies will get stuck in your head the way Bandersnatch will.

The movie: A single Icelandic mum struggling in poverty finds her life suddenly and unexpectedly intertwined with that of an asylum seeker from Guinea-Bissau. It’s director Ísold Uggadóttir’s first full-length directorial project, and it’s garnered plaudits around the world including a World Cinema directing award at Sundance 2018, where Netflix picked this movie up for international distribution. It also marks a step in Icelandic filmmaking where inward (sometimes navel-gazing) focus on history and more traditional Icelandic society is substituted for an acknowledgment of the country’s modern, more multicultural existence, and the struggle it faces in that transition.

Why you should watch it: With the refugee emergency the world currently faces, this Icelandic indie movie is a simple, personal, but well-executed rumination on the strife the people involved can face. Yes, it’s bleak and cold, but if you want a break from superficial comedy or brainless action for a night, you’ll find excellent writing and heartfelt performances in an unassuming package.

The movie: You know when you accidentally send an email or drunk-text your crush? This is the premise of To All the Boys I’ve Loved Before, but with letters. Here, Lana Condor’s Lara has written letters to every boy she’s ever had a crush on and suddenly finds that they’ve all mysteriously been mailed out to those boys. Embarrassment soon turns to full-on panic when these romantic revelations lead to unexpected interest from more than one of the boys. Romantic comedics ensue, but not always as you would expect them.

Why you should watch it: If you’re a fan of romantic comedies then this should be right up your alley. And even if you’re not, it’s still worth checking out as it subverts the usual rote rom-com traditions in various ways. Also, Lana Condor is an endearing revelation in a movie that refreshingly stars an Asian-American in the main role and not as the quirky sidekick, for a change.

The movie: From the producer of Green Room, and starring the criminally-underrated Melanie Lynskey and Elijah Wood - who has mastered the art of the offbeat outcast character in recent years (just watch Dirk Gently, Maniac or Wilfred for proof) - you might assume I Don’t Feel At Home In This World Anymore will a be left-field movie. And you’d be correct. Ite follows the increasingly violent misadventures of Ruth and her martial-arts obsessed neighbour Tony as they track down a burglar who stole Ruth’s grandmother’s silver spoon.

Why you should watch it: Equally humorous and cynical, I Don’t Feel At Home In This World Anymore is one of the best Netflix Original movies because it echoes many people’s disaffection with the world. It is an often-hilarious take on someone who decides to stand up against an increasingly self-centred society… albeit with surprisingly bloody results.

The movie: 17-year-old offender Zachary gets out of jail in his home city of Marseilles and  immediately gets back into cahoots with his old gang to continue his life of crime, which includes pimping out sex workers. One day, though, he meets Shéhérazade, a young sex worker. He falls for her, and gradually becomes increasingly involved with her, which causes all sorts of conflict as his life escalates out of control.

Why you should watch it: Yes, this movie navigates a well-trodden narrative path, but Shéhérazade more than earns your two free evening hours. There’s French grit, simmering tension, and echoes of other French dramas involving outcast youths involved in crime (La Haine springs to mind). Plus a gorgeous neon-tinged visual palette mixes with the squalor the characters find themselves desperately trying to escape, with a strong soundtrack and confident performances from the young cast.

The movie: A previously-lost Orson Welles film, Other Side of the Wind features Jake Hannaford, an elderly Hollywood director, hosting a screening for his new movie, also titled Other Side of the Wind. The movie-within-a-movie spoofs both the Golden Age of Hollywood and the experimental cinema that punctured much of the late-1960s. The kicker, too, is that the audience is told straight away that this is Hannaford’s final day on Earth. Not a bad way to start a movie, that’s for sure.

Why you should watch it: Not only is this a piece of movie history (having previously remained incomplete after Welles’ death), Other Side of the Wind is unmissable for several reasons besides that. It’s a fantastic pastiche of modern and classic cinema, and is Orson Welles giving something new to the medium he dedicated his life towards. It also comes coupled with a documentary, They’ll Love Me When I’m Dead, which is just as endlessly fascinating and re-watchable as the source material.

The movie: In a lockout in a pro basketball league (that due to licensing issues we’re not allowed to call the NBA), a young and ambitious sports agent named Ray finds himself at the centre of a pitched battle for power between the players and the owners. Representing a supremely skilled young player, he decides to fight what he sees as a system of suppressing the voice of predominantly black players by the teams’ owners, who are mostly white, in an escalating high-stakes game of ratings, money, and power.

Why you should watch it: If you’re a sucker for a sports drama, you’ll love High Flying Bird. Like the movie correctly states, basketball is the sexiest sport on Earth, and there is some great action here peppered in among strong conversation scenes. It’s all directed by Steven Soderbergh, who has retired more times than Michael Jordan but just can’t stay away. Plus, it's all shot on an iPhone.

The movie: With a deceptively boring title, The Kindergarten Teacher’s opening act is innocuous enough. Maggie Gyllenhaal is a – you guessed it – kindergarten teacher who one day, by chance, discovers that one of her kids seems considerably more gifted than the other 5-year-olds she teaches. With a flair for advanced creativity and even a poetic flair, he soon becomes an object of fascination for her. This turns into obsession when she is rebuffed by the boy’s family in her attempts to channel his apparent genius. What follows straddles the line between drama and psychological thriller…

Why you should watch it: Two words: Maggie Gyllenhall. We knew she was a talented actress already, but here she gives one of the performances of her career. The movie is surprisingly exciting too, with writing, direction, and cinematography that enhances the slightly unsettling story without jumping into over-pretentious territory. It’s probably not for faint-hearted parents though.

The movie: Directed by Mike Flanagan (who also made Hush and Oculus), Gerald’s Game is a thriller with a twist: the protagonist is handcuffed to a bed for almost the entire movie. Carla Gugino and Bruce Greenwood play a couple who rent a secluded cabin to spice up their marriage. Shortly after handcuffing Gugino’s Jessie to the bed as part of a sex game, Gerald suddenly dies. Tied to the very sturdy bed, and with no one else close enough to hear her cries for help, Jessie faces a fight to survive.

Why should you watch it: Claustrophobic thrillers like this can often be hit-and-miss, but this one’s in the former category. It’s led almost entirely by Gugino’s intense performance, with the ever-classy Greenwood pretty much the only other cast member. The quality of acting elevates a well-executed genre movie.

The movie: Joon-ho Bong directs a sci-fi adventure movie with overt references to the modern food industry. Starring Tilda Swinton, Paul Dano, and a cast of insanely talented actors, Okja caused a lot of discussion and debate at the time of its release, especially around the ethics of meat production. It also showed that companies like Netflix could make a success – and a thumping one – of left-field creative choices, as long as they do it with confidence. And Joon-ho Bong and co have that in plentiful supply.

Why you should watch it: It’s one of the best Netflix Original movies due to its fantastic performances, a bold and inventive storyline, lots and lots of great action, and it’s all presented in an eye-poppingly vivid visual package. Also, who needs an excuse to watch anything with Tilda Swinton in it?

Turn to page 2 for more of our picks of the best Netflix Original movies...