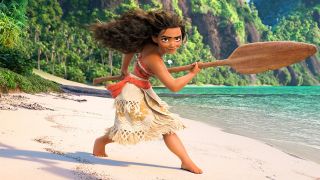 In 1922 Walt Disney started producing cartoons based on fairy tales and fables, and they’ve entertained generations for nearly 100 years since. Touching birth, love, death and everything in between, these stories combine human truths with just enough musical numbers to send audience serotonin levels cartwheeling. This list of the best Disney movies focuses on the animated movies only - sorry pal, Disney Pixar requires a whole separate draft. Weighing up their iconic moments, song choices, and cultural impact, these represent the best that Disney has offered up since its first feature movie in 1937.

But before we get stuck in to our ultimate ranking of the top 25 best Disney movies, let’s begin our journey with a quote from Mr Disney himself: “I only hope that we never lose sight of one thing — that it was all started by a mouse”.

We kick off with an iconic Disney classic that nevertheless proved a disappointment at the box office in 1951. The problem was a classic case of ‘too many cooks.’ Multiple creatives worked on Alice in Wonderland - including for a time the pen behind Brave New World, Alduous Huxley, who was hired to flesh out the script. Unfortunately he swiftly departed the project after one-too-many meetings where he felt his voice was ignored. This unhappiness spread to the other competitive directors who each tried to outdo each other in their various sections, resulting in a trippy soup where everything is so mad that the flavour becomes bland. When scene after scene is lunacy, the chaos becomes quite… normal. Still, Alice in Wonderland became a cult favourite during the 60s for perhaps obvious, caterpillar-shaped reasons.

Yes, we may have all fancied the foxes, but beyond that - how good is Robin Hood, really? There’s a certain ragged charm to its animation, and it certainly wins prizes for nostalgia power, but it’s not that innovative. The 1973 movie was rushed for time, and so it recycled sequences from Snow White, The Jungle Book and the Aristocats, falling back onto lazy stereotypes like making the Sheriff of Nottingham a wolf. In the aftermath of Walt Disney’s death many of the creative leads scrambled to try and figure out what their former boss would have wanted to make, rather than reflecting on what new unique stories they could tell. The result is a hodge podge of ideas that have a certain charm, but are ultimately half baked. Still, Robin Hood was a successful “buddy movie” and is happily lauded as a Disney cult classic.

The 18th movie in the Disney animated canon, by this point Walt Disney had largely washed his hands of creative responsibility and approved the final script while rubbing sun cream into his shoulders on holiday in Florida. Feeling slightly neglected, the remaining team immortalised their leader’s bulbous nose and flighty creativity in the character of Merlin. Suddenly the bit where Merlin transforms into a rocket bound for bermuda - missing the entirety of the movie’s final act - makes sense, doesn’t it? Other gripes included a slashed budget (40 percent of what 101 Dalmatians had before it) leading to a chaotic story that cavorts from a hunting trip to a lecture on gender relations among squirrels. To save money, some of the backgrounds used for the opening credits were reused from Sleeping Beauty, while the deer Kay tries to shoot with his bow was a recycled model of Bambi’s Mother (she never really catches a break). Still, the madness is a fun wave to ride, and the charm of these flights of fancy still makes it one of the best Disney movies over fifty years later.

The Aristocats was the last project Walt Disney worked on before his death in 1966 during the movie’s production. Following in the wake of 101 Dalmatians, Aristocats moulds that movie’s visual style into something not-quite-fresh but dully sweet. Strong vocal performances by Phil Harris as Thomas O’Malley - who also voiced Baloo in The Jungle Book - and Eva Gaboor as Duchess brought the script to life. Then there are the songs like ‘Everybody Wants To Be A Cat’ that remain classics to this day. These were the last musical numbers to be penned by the legendary Sherman Brothers before departing the studio, saying the atmosphere had become too toxic following Disney’s death. This sense of unease managed to stay out of The Aristocats, however, which remains a perfectly charming though perhaps forgettable tale.

When nowadays a single doggo sneeze can generate 10,000 retweets, it’s perhaps a surprise that the biggest star of a movie about dalmatians isn’t one of the 101 adorable puppies, but a cigarette-puffing villain with bad eyeshadow. Cruella De Vil is firmly cemented as one of the most iconic criminals of all time, spotted at Halloween parties the world over. Her theme song remains an earworm, even while the movie’s actual story is a tad bland (can anyone actually remember where all the puppies come from?). 101 Dalmatians was a triumph over adversity inside a Disney studio plagued by financial concerns. The animation team pinched the pursestrings by experimenting with a new process called xeroxgraphy, where their lines were essentially photocopied from one frame to the next, resulting in a scratchy-yet-elegant effect.

Turn to page two for more of our picks of the best Disney movies of all time...