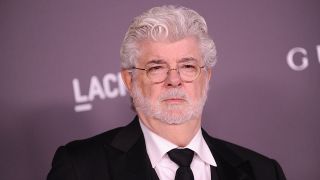 By now, you’ve probably read a whole bunch of opinions on Star Wars: The Last Jedi. But there’s only one that really matters: George Lucas. The granddaddy of the galaxy far, far away may not be in charge of the franchise anymore, but his verdict still holds weight. Did he like it? Oh yes.

In a very short statement to The Hollywood Reporter, a rep for George Lucas confirmed that the Star Wars creator had recently watched Star Wars 8 and seems to be extremely pleased with the outcome, calling it “beautifully made.”

Lucas also had a chance to speak with director Rian Johnson about the movie and was said to be ‘complementary’. That’s good news for Star Wars fans old and new, then. Johnson must have been shaking like a leaf when he got that phone call, but to get the seal of approval from Lucas himself must rank up there with anything he’s been awarded in his career.

Lucas has gained a reputation for chopping and changing bits and pieces of his Star Wars movies – who can forget Hayden Christensen as a Force ghost in Return of the Jedi? – so it wouldn’t be surprising if he also gave a few pointers for Johnson’s upcoming Star Wars trilogy. If nothing else, it’s nice to know he still cares about his baby – and the feeling seems to be mutual.

If you want to find out how George Lucas nearly wrote the perfect Star Wars prequel trilogy then step right this way...