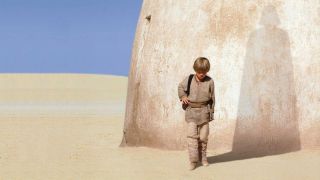 This article was initially published on GamesRadar+ in December 2015 – republished now to celebrate the release of Star Wars: The Rise of Skywalker.

The Star Wars prequel trilogy is nearly brilliant. It took me 10 years to realise it, but it’s true. You see, the other night, my girlfriend and I drank a bottle of wine and started, as is entirely understandable, ripping into Episodes I to III. We hit the usual, obvious punching bags – Jar Jar, Anakin’s creepy characterisation, the pointless set-pieces – but along the way, we noticed something big. All of the plot points required to make the prequels tell a sensible, meaningful, satisfying and affecting story are actually already in there, either explicitly on-screen or strongly alluded to. But for some reason, George Lucas doesn’t seem to notice that he’s written them, and ignores the lot.

Stick with me on this one. I haven’t gone mad, I promise. It all starts with the fundamentals of Star Wars lore.

You see, Star Wars has always been about binary, black-and-white morality. In the original trilogy, that works just fine. The good guys are plucky underdogs, and the bad guys are a fascist galactic empire who think nothing of blowing up a populated planet for shits and giggles. In the wider, more complicated world of the pre-Empire days though, things are, and should be, more nuanced.

While they might be merry old samurai hippies in the original trilogy, the organised, prolific, altogether more militarised Jedi of the prequel period are a hardcore conservative faction, incredibly rigid in their doctrine, code, and methods. They are ubiquitous, unchallenged, and if anything, slightly too powerful. They have restrictions on sexuality, a strict religious code, make free use of mind control for "the greater good", and enforce stoicism to the point of detachment. They demand utter devotion, are run by an oligarchy, and almost entirely cut themselves off from the outside world. Which, by my count, all sounds a bit cultish.

The Sith, on the other hand, are staunch libertarians. They accept no oversight or control from the state, practice a self-centred philosophy, and value personal freedom over social responsibility. Both sides are arguably problematic in their own ways, their extremist attitudes to their own philosophies making all elements of their conduct potentially rather dangerous. Suddenly the simple, unambiguous lines between the Light and Dark sides are rather blurred. They’re binary opposites in terms of ostensible alignment, but in practice, neither is entirely good or bad. Wherever it stems from, extremism always tends to boil down the same way. And that really raises questions about "balance in the Force".

Enter Anakin, prophesised as the Chosen One who will bring that balance. It all falls apart, of course – from the Jedi perspective at least – when he is tempted by the Dark Side. The prophecy was a lie! Or was it? Who knows? It all gets a bit confusing, and the remaining Jedi just run from the issue for a couple of decades. Yet, let's look at Anakin's shift in polarity slightly differently: that the Chosen One is warped by the biases and failings of factions who don’t really want balance at all.

We hear about balance all the time. It’s portrayed as the Jedi’s key, long-term goal, and the ideal state for all of existence. But even with a respected High Council and countless Knights acting as Galaxy Police, the prospect of just a single Sith/Apprentice combo existing at any given time – “Always two there are” – is far too much to bear. The Jedi version of equilibrium is actually the eradication of the Dark Side. This inherent failing, this self-focused misinterpretation, is the core of what the prequel trilogy should have been about.

With both, deeply flawed sides explicitly battling for control of Anakin’s soul, and the issue of "balance" being front and centre, the stage is clearly set for the young Darth to be not an angry teenager on an inevitable slide to tragedy, but the first moderate Jedi – a thoughtful, questioning young man who can bring actual balance by controversially walking the line between the two factions. The reason he can do this? He can see things no other Jedi can because he was "too old" at the start of his training.

We’re told this multiple times when Anakin joins the Jedi, but it’s never properly explained. We broadly understand that the Jedi only recruit really young, and that Anakin’s ripe old age of nine puts him way over the hill. We hear vague talk that he has "too much anger". We’re told that training him will be impossible. But we’ve already seen Luke successfully trained, at the age of around 17, despite also apparently being "too impatient", "too angry" and "unfocused". There must be another explanation.

How’s about indoctrination? After all, it’s a hell of a lot easier to make a recruit accept a dogmatic lifestyle if they start too young to remember anything else. Anakin, though, can remember life before his Jedi training. If the films had been brave enough to use him as an audience point-of-view character to explore the nuances and problems with the prequel world, then we would have had a hell of a powerful story set-up. Because good lord, does Anakin see some things.

He sees burgeoning child soldiers, being trained in lightsaber combat, but the scene is played for cuteness rather than moral disturbance. He sees the Jedi regularly control innocent minds for their own ends. He was "benevolently" taken from his mother’s care – Qui-Gon’s talk with her effectively amounts to, "He’s a slave, do you want him to remain a slave? Better give him to us. No, I’m not going to rescue you, although I totally could" – and Anakin must have seen this happen to countless other, Force-sensitive children by Episode II.

By Episode III, the still-young Anakin has a massive facial scar. He must have been through some serious shit already, and, realistically, should be suffering some level of brutalisation/trauma/depression/PTSD. But rather than addressing any of the above, the movies reduce his would-be legitimate issues with the Jedi to arrogant, teenage sulking.

But what if they didn’t? What if, instead of vague, generic complaints of anger and unfairness, Anakin and the Jedi have considered philosophical friction, stemming from Anakin’s intelligent observation and conscious decision-making? Then Anakin has perfectly sensible reasons to have issue with the Jedi, and thus his actions can be understood and empathised with. And most crucially, he has – as every protagonist should have – real agency.

In the existing prequels, he bounces haphazardly from crisis, to emotional tirade, to impulsive response, like an out-of-control drunk. He comes across as stupid, thoughtless, and devoid of any control over his own path or actions. That’s not how you create an engaging lead character that the audience can really go on a journey with. But if all of the existing groundwork were followed through, it would have created a wonderful mirror to Luke's story, Anakin growing to self-realisation and then clashing with the Jedi, just as his son completes the same journey to battle the Sith. There’s poetry there. It rhymes. There’s balance.

And there are subtler problems to explore within the Jedi machine, again, largely glossed over, but still there on-screen. Obi-Wan’s youth and inexperience mean that he isn’t ready for Anakin’s training either, eventually letting the master/student relationship erode into friendship. The idea gets occasional lip-service, but Anakin’s lack of a strong guide or guardian should be the back-bone that informs his entire descent.

Then there’s Yoda. He appears cold and clueless in the prequels, but there’s a way to make that work in the saga’s favour, too. The original trilogy introduces Yoda as a spiritual, internalised Jedi of the mind, who knows that inner strength, not outward aggression, brings true power. Blend this with the themes of inward-looking Jedi detachment we’re exploring in this remix, and you have both a great case for Yoda’s prequel trilogy ineffectuality, and a perfect philosophical figurehead for the organisation Anakin opposes. And by training Luke – directly contradicting the old Jedi rules in agreeing to do so – Yoda later gains his own arc of redemption-through-moderation, to parallel that of Vader.

With Yoda an absentee landlord, there’s also plenty of space for hard-ass Mace Windu to ascend as the aggressive, dominant, dogmatic force he should have been – a personification of the Jedi hardline spearheading Anakin’s opposition. With these dynamics explored properly, Anakin is a genuine threat to a genuinely worrying dogma. This doesn’t make him a bad guy, but the more set-in-their ways, extreme Jedi of the Council will see him as exactly that.

As for Padme? Imagine that relationship written plausibly. Imagine that Anakin isn’t a generically angry teenager, and that Padme is an intelligent, pragmatic human being, rather than a flighty robot-woman. Rather than repeatedly blowing hot and cold, and arbitrarily throwing out, "But I’m a senator" excuses (like that explains anything), Padme follows her heart, but the weight of Jedi disapproval weighs heavy on the relationship. Until, that is, the Jedi act to end it. Forget the nonsensical contrivance of Anakin’s dream of Padme’s death. With oppressive Jedi disapproval clearly apparent, there’s already a much more sensible and meaningful catalyst for Anakin’s ultimate desertion.

Anakin is not tricked into embracing the Dark Side. He chooses it. Not because he wants to, but because he is forced to, by those who don’t truly want the balanced line of moderation and progress he aspires to. He’s bullied into choosing an extreme, and while the hardline of the Sith is philosophically no better than the hardline of the Jedi, by that same note, it is no worse. Anakin understandably makes a very human decision, and goes for the option that looks to help his real, personal situation. It’s a move we can sympathise with, and rather beautifully, one that parallels philosophically with the Sith’s libertarian ways. Plot, subtext, action, and ideology all in sync, informed by – and informing – real character development.

All of this would make Darth Vader stronger, not weaker. It was an impossible notion before the prequels hit, but they actually make it hard to respect him. They turn the biggest, most interesting, most enigmatic bad guy in the galaxy into a sniveling, mopey teenager, blighted by angsty, adolescent grumbles and mistakes.

Get it right and Anakin’s desire for change could have fortified his reasons for leading the Empire under Palpatine in the original trilogy. His relationship with Luke could have even been made more poignant. Perhaps he's not strictly trying to corrupt his son, but wants to create balance that he himself wasn't able to achieve in his youth. He sees Luke not as a potential Sith apprentice, but as a way out from beneath the Emperor's tyranny, and an opportunity to rebuild the Force anew. Luke represents the chance to regain his family, the loss of which pushed him to his reluctant decision in the first place.

Heck, given his history with the oppressive Jedi, Vader has probably resented the Emperor for a long time, and for very similar reasons – a nice callback to the idea that one extremism is as bad as another – but only truly manages to break his indoctrination at the end. Because manipulative, abusive relationships are hard to get out of. If all of this had come to pass, we’d have a prequel trilogy that supports and improves the original, rather than sitting separate and contradictory as it currently does. Oh George, what could have been.