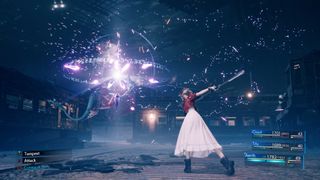 Square Enix says US-based customers who pre-ordered the Final Fantasy 7 remake from their store need to reconfirm their order. In a social media post, the studio says pre-orders that aren't reconfirmed via email will be cancelled after the February 28 deadline.

It's not clear why the recent delay is affecting pre-orders this way, but fans who want to make 100% sure they have their copy by release would do well to heed Square Enix's instructions. It's also worth noting that the new schedule means your payment for the pre-order will now process on February 28. Square Enix says you'll get an email reminder to make sure your payment information is up to date.

Remember, this only applies to pre-orders that came directly from the Square Enix store. If you pre-ordered the Final Fantasy 7 remake from Amazon, GameStop, or anywhere that isn't the online Square Enix store, you needn't worry about any of this.

The Final Fantasy 7 remake was just recently delayed by a little over a month, which is fairly modest considering what we've seen from other games. Not to open up any sore wounds, but the long-awaited Cyberpunk 2077 was just dealt a five-month delay. What I'm saying is, things could be worse, so secure that pre-order before time's up.

Despite the delay and minor pre-order hassle, Final Fantasy 7 is shaping up to be one of the best new games of 2020.