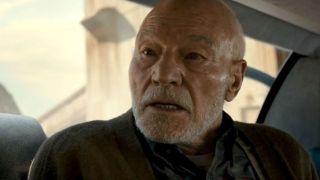 It's been a while since we've heard anything about X-Men showing up in the MCU. Until now, that is. Professor X actor Patrick Stewart has revealed he held talks with Marvel Studios president Kevin Feige about those characters, including Charles Xavier.

“I met with Kevin Feige a couple of months ago and we had long, long conversations," Stewart told Digital Spy, before teasing that "there have been moves and suggestions, which include Charles Xavier."

Feige, who namechecked “mutants” during the big Marvel Phase 4 blowout reveal at San Diego Comic-Con last July, has kept the introduction of X-Men under wraps, understandable given Disney only officially acquired Fox (and its stable of superheroes, including the likes of Wolverine, Cyclops, and, yes, Professor X) last year.

But Feige has revealed prior to these talks that there is a five-year plan currently in place for the MCU – which doesn’t include the X-Men. Plans can, of course, change – remember the Inhumans movie? – but X-Men almost certainly isn’t in the MCU’s immediate future.

You don’t need to have telepathic skills to wonder where this is going next: will Patrick Stewart be returning as Professor X? According to the actor – who is set to reprise another of his most famous roles in Star Trek: Picard later this week – his appearance in Logan served as an appropriate end to his incarnation of the character.

Stewart said: “Here's the problem... If we had not made Logan, then yes, I would probably be ready to get into that wheelchair one more time and be Charles Xavier. But Logan changed all that.”

So, Patrick Stewart probably isn’t going to be back as Professor X but, for the first time, the X-Men showing up in the MCU suddenly feels very, very real. Isn't that exciting?

Quick! Brush up on the Marvel timeline before it gets *too* confusing.