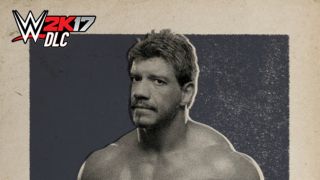 The already massive WWE 2K17 roster has bulked up even further with the announcement of 20 more superstars as DLC, and a load of new outfits for those already confirmed.

Eddie Guerrero, Sycho Sid, The Fabulous Freebirds, and Papa Shango (yes!) are among the 'rasslers being added to the game in this way, along with a handful of current roster members such as Luke Gallows, Karl Anderson and Mojo Rawley.

Here's the breakdown of each pack, and what they add. Those marked with a * have already been confirmed for the on-disc roster, but get new outfits via DLC.

Also available for download is this other bunch of cool stuff:

It'll also be possible to purchase a season pass containing all the above DLC characters, plus the New Moves Pack and Accelerator, for $29.99.

We'll share UK and European prices as soon as we have them.

Rawley, Guerrero, Anderson and Gallows all featured in our 15 wrestlers we need as DLC feature. Woo woo woo, etc.