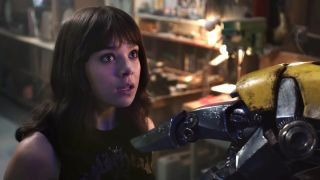 Bumblebee takes the Transformers back to the '80s for the film franchise's first full-on spinoff. Before the Michael Bay chapter of Transformers began, it was safe to say the '80s were the biggest and best time to be a robot in disguise (or a fan thereof). But it was more than nostalgia for toys and cartoons that convinced Bumblebee director Travis Knight to take this radical approach to a prequel, as he reveals in an interview with our sister publication SFX magazine.

Knight's first contribution to Transformers (you might know him for heading up Kubo and the Two Strings) tells the story of a gearhead teen who gets her first car on her 18th birthday. Naturally, her beat up Volkswagen Beetle turns out to be Bumblebee. Any flashbacks to the first live-action Transformers are entirely justified. The premise is a deliberate callback to what Steven Spielberg, then executive producer on the nascent action movie franchise, recommended: it should be about "a boy and his car" as much as a war of the worlds.

Well, 'girl and her car' now. Knight took that Spielberg connection and ran with it: "Those great, powerful Amblin films of the '80s, when I came of age, really stuck with me," Knight explains. "They really excited my imagination, and got me to think about storytelling in a different way. The classic Amblin films would always evoke three beautiful responses in me. It was wonder, it was laughter, and it was tears. Transformers fused with that filmmaking philosophy of those great Amblin coming-of-age stories of the '80s felt like a perfect marriage."

The thematic connections came naturally, and so did the narrative ones; Bumblebee was an early scout for the Autobots, and it made sense to tell more of his story from before the rest of the team arrived in force.

"[Setting it in the '80s] felt consistent with the direction of the story we were doing," Knight says. "The mid-'80s was when the Transformers first arrived on our shores, and it felt like if we were going to go back to the beginning to show where this character came from. This was a natural place to begin. It was also a pretty exciting time both in terms of the music and the fashion, the design, and yeah, the nostalgia."

Read more about Bumblebee, including a tragically cut jab at GoBots, in the latest issue of SFX. Read a preview of the neon-drenched edition or subscribe so you never miss an issue.

We're also available on Google Play and Zinio, and most digital formats give you a 30-day free trial, so you can try before you buy! For Apple users: click the link and you’ll be directed to SFX's page in the App Store – once there, install the SFX app, or, if you’ve done that already, hit Open to be taken to the SFX storefront.