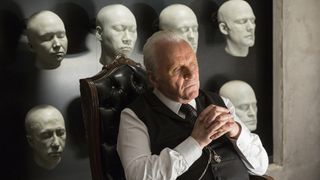 Westworld season 2 is slowly but surely appearing on our radars, and it’s mostly because of things like this: a piece of viral marketing on the Westworld site that hints at the Hosts taking over completely and the guests of the park being in mortal danger. Talk about a game-changer.

If you want to see what all the fuss is about, visit DiscoverWestworld.com (unfortunately only accessible in the US) and you’ll be greeted with a glitchy GIF that sees apparent guests trying to contact the outside world before being shut down by what you’ve gotta assume are the rogue Hosts. Feeling left out? You can see the GIF below.

So, are the Hosts taking over? It sure looks that way – and that has wide-reaching consequences for season 2. A park that has guests being able to literally die ups the stakes considerably, and will only confuse matters further about who is or isn’t a robot. My head hurts just thinking about it. But think about it I shall:

Of course, the season ended with Ford biting the bullet and the Hosts staging a coup on the eve of Ford’s new narrative… or was it all part of Ford’s narrative all along? It wouldn’t exactly be surprising to see Ford come back in one shape or another - especially as we know there was/is a Young Ford robot just waiting to be properly discovered. Did Dolores even shoot Ford - or was that just a duplicate? Remember, Ford has an off-site printer that was glimpsed at when Bernard accompanied him to the depths of his fake childhood home. So many questions from one simple action. That's Westworld for you.

Just the one timeline this time around?

The big twist from the first season - that we were actually watching duelling timelines - clearly wouldn’t have the same impact a second time around. It’d definitely make sense for Westworld to jettison the timey-wimey stuff and vacuum everything into a nice, tight timeline where we deal with the guests trying to escape. Sure, you can play with chronology and keep the proper flashbacks, but fool me twice, shame on you.

Will we get a look at the world outside the park?

Westworld oh-so-briefly teased a look at Delos’ involvement with the board member Charlotte Hale trying to get the Hosts’ data out of Westworld. The show should firmly remained centered around the park but there comes a time where - especially with the guests being trapped - the world at large should come into play…

What's going to happen to Maeve?

I haven’t even mentioned Maeve, who had a crisis of conscience after seemingly becoming self-aware yet returning to the park to save her ‘daughter’. How will she tie in to season 2 if the Hosts are hellbent on going on a murderous rampage? Could we be looking at our new protagonist?

Will it be as simple as Hosts vs. guests?

Absolutely not. This is Westworld after all. You can bet dead-but-maybe-not-dead Ford has a few tricks up his waistcoast (no sleeves, duh) to keep things interesting. Maybe a few Hosts will be double-agents and maybe, just maybe, some guests will turn out to be murderous assholes. Surely not?

TL;DR? Those violent delights will have even more violent ends. Yay.