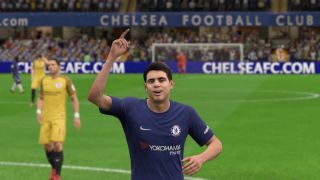 EA's FIFA series is known for packing in a zillion players and leagues from across the globe, but it's the fans who suffer when one of those players moves to a club that isn't in the game – as it means their immediate removal from Ultimate Team. In that way, recent Chinese Super League acquisitions such as Oscar and Odion Ighalo are currently unavailable in FUT regardless of their popularity with fans of Chelsea and Watford respectively.

That may change for FIFA 19, if an ongoing fan poll by FIFPlay has any clout with developer EA Canada. The Chinese Super League has been voted the one gamers want most in next year's edition, which would mean the inclusion of Oscar's Shanghai SIPG, Ighalo's Changchun Yatai, and Tianjin Quanjian, home to beautifully coiffed Belgian international Changchun Yatai. (See pic below – Huddersfield Town kit purely for illustrative purposes.)

At time of writing the Chinese league has scored 8% of the overall vote, with more than 70,000 fans tabbing it for inclusion in FIFA 19; but three competitors run it close. UAE's Arabian Gulf League holds the runners-up spot on 7% with 69,600 votes, ahead of the third-placed HET Liga from the Czech Republic (7%, 67,600 votes). One club from that league, Sparta Prague, is already in FIFA 18.

FIFA 18 featured one new league, the German 3 Liga, so the door is definitely open for fresh teams each year.

Wondering what may be in store from FIFA's biggest rival next season? Then check out what Konami's Adam Bhatti had to say to GR regarding PES 2019…