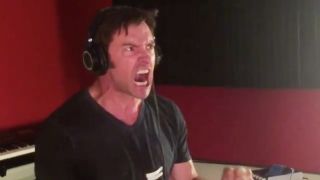 Hugh Jackman has been playing Wolverine for 17 years, but here’s a side of him we’ve never seen before. In a new Instagram video, the actor shared a clip from a post-production recording session for Logan that required him to recreate sounds from one of Wolverine’s fight sequences, and it’s… well, take a look for yourselves:

It’s kind of hilarious, but also terrifying at the same time (hilarifying?). Either way, it’s remarkably intense. I love how you can see the rage in Jackman’s eyes when he’s snarling his way through the clip, but the second it’s over, he just switches it off and meekly says “Hi” like he’s an entirely different person. That’s some real acting, my friends.

5 questions I have after watching Logan

ADR (automated dialogue replacement) isn’t a part of the filmmaking process we often get to see, so it’s always cool when someone pulls back the curtain a bit and gives us a glimpse of what it’s like. I imagine it would be incredibly difficult for actors to get back to the same mental state they were in on the set months before, but a veteran like Jackman has done this tons of times at this point and it looks like he’s comfortable with the process, disappearing into the character one final time.