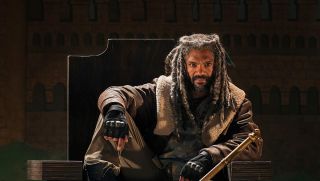 We're just over a month away from the season 7 premiere of The Walking Dead, which will finally reveal Negan's victim. AMC have been teasing characters whose heads are not on the chopping block to keep up the mystery, and the latest promo - which focuses on The Kingdom and its leader, King Ezekiel - follows the same strategy.

There's certainly plenty of intrigue stuffed into the 30 second footage drop, which features glimpses of a rooftop fall, bloodied pigs, and a few walkers escaping from a sand pile.

There's no denying what the main attraction of the Walking Dead's season 7 premiere is though, and everything we've heard from those involved suggests that it will be well worth the wait. Here's hoping it delivers.

AMC have also debuted some new poster art for the upcoming season that has Jeffrey Dean Morgan's villain in a familiar pose. Check it out below...