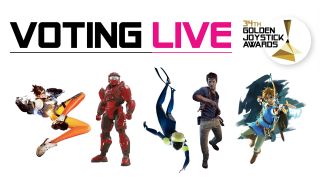 The 34th Golden Joystick Awards are your chance to get behind your favourite games of the last 12 months. Every vote counts, with the most popular games in key categories such as Ultimate Game of The Year shifting day-by-day. Who should reign triumphant? Fallout 4 or Firewatch? Only you can decide. Plus, to reward you for choosing the winners in the video game equivalent of the Oscars we've got a special game bundle courtesy of Green Man Gaming.

For just £1/$1/€1 you'll get digital PC copies of the excellent Spec Ops: The Line, Sid Meier's Pirates and a Green Man Gaming Mystery Pack. To claim your games, simply vote in the Golden Joystick Awards and you'll be contacted in October with further instructions for how to claim.

Don't forget, you will be contacted in October for details on how to claim, but you'll need to vote now to sign up.

Remember, for the first time ever, you can now attend the event. Tickets for the awards on November 18 in London are available for £10 and are on sale here.