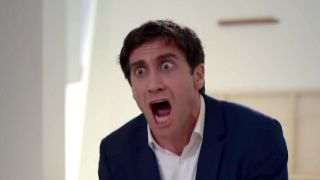 Velvet Buzzsaw is new on Netflix after a limited run at theaters, and reviews for the dark horror/comedy are as divided as you'd expect from all those bewildered initial reactions on Twitter.

"Velvet Buzzsaw is perhaps the first-ever art-world horror satire, but it has the feeling of a bawdy night at a mystery dinner or an anti-Establishment mummers play - and I mean this in the most complimentary way possible. Its colorful, uniformly narcissistic ensemble enter and exit in fabulous outfits as they weave a tangled web of money, sex, and influence, but we know we're really just there to see who dies and how brutally. Writer and director Dan Gilroy is drawing from the same well of a bitter, morally compromised Los Angeles that he did for 2014's Nightcrawler, but Velvet Buzzsaw, as gleaming and sun-drenched as Nightcrawler is dark, is even more of an invective, and even more operatically heightened."

"Gyllenhaal's Morf morphs, if you will, from a seemingly cliched devil-may-care caricature into a troubled and perhaps even tormented soul questioning everything from his work to his romantic choices to even larger and more disturbing concerns. He delivers Morf's one-liners with meticulously calibrated precision - but he's equally effective when Morf is in the depths of despair. The great veterans such as Malkovich and Russo and Collette are as good as we'd expect them to be, while Daveed Diggs creates a memorable character with relatively little screen time and Zawe Ashton is blazingly strong as Josephina, who reveals different levels to her character as the plot - and the blood - thicken. Velvet Buzzsaw has the kind of bite that leaves a mark."

The film looks at the world through a funhouse mirror, and finds a fallen kingdom in which everyone needs external validation, and no one gets to determine their own value. Even Morf, who thinks of himself as a living God in the body of a pilates addict, is eventually forced to question his own worth as the food chain between money and art begins to reshape itself into a flat circle or a reflective metal sphere. Gilroy's film needed to be 60% better or 20% worse in order to transcend the forgettable silliness of its existence, but it could stand the test of time as a lasting monument to the idea that our own personal taste is the only real thing we ever had.

Velvet Buzzsaw is a bonbon spiked with wit and malice, inviting us to join a nest of hyper-articulate, morally hollow vipers as they destroy each other with cruelly hilarious abandon. What fun, until it isn't anymore. As writer and director, Gilroy misguidedly turns his lampoon of the greedy elite who bugger art in the name of commerce into a clunky horror show. For real. Gilroy bloodies up his A-list actors - led by a smashing Jake Gyllenhaal as a sniping critic - the minute they compromise their integrity for profit. It's no surprise that hardly anyone is alive by the time the film ends. It is a surprise that Gilroy would center his entire film on such a shopworn theme. Money is good for business but bad for the soul. Is that all there is? Sadly, yes, with gore as the cherry on top.

Velvet Buzzsaw hews rigorously to horror formula, except when it comes to dispatching the baddies with visual aplomb. For a film that often dazzles with its production design, only a single death scene aspires to gonzo flair. And yet the film's undeniable silliness is matched by a compelling sincerity. The script's insistence on the sanctity of the relationship between an artwork and its creator, and even of the relationships among artworks themselves, is some woo-woo, death-to–The Death of the Author piffle. But Gilroy's passionate advocacy for his ideas proves so unexpectedly infectious that Velvet Buzzsaw eventually develops a righteous, rousing kick.

See where else the year is going with our look at the upcoming movies of 2019 and beyond.