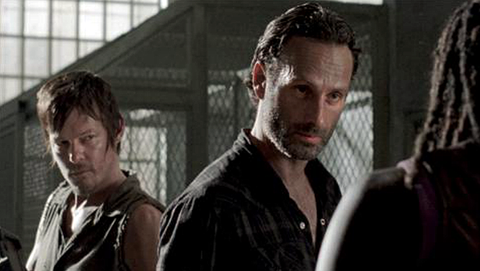 “The Suicide King” , the first episode of the second half of The Walking Dead season three airs in the UK on Friday 15 February. We’ve had a sneaky peek, and here, in time-honoured SFX tradition, are some teasery, non-spoilery clues as to what to expect:

It's a brooding, ominous episode that’s big on tension.

Glenn puts the boot in.

Finally, someone acknowledges the sexual tension between Andrea and Michonne.

“We started something last night…”

Hershel is the voice of reason once again. But is anyone listening?

We get to know the rest of Tyreese's group a bit better: Sasha, Ben and Allen.

The Governor is surprisingly candid with Andrea.

Andrea is still quite thick.

Somebody is a lil' asskicker.

Rick has an unexpected visitor.

“The Suicide King” is a reference to the King Of Hearts playing card, which depicts a king holding a sword to his own head. Traditionally, the card symbolises the rebirth of someone who has experienced both joy and tragic pain. That could represent at least three different characters in this episode...

• Read our reviews of The Walking Dead season 3 so far