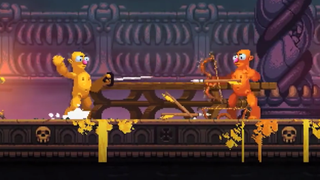 2014's Nidhogg was a delightfully minimalist game about colorful pixel people dueling to the death, with graphics that looked straight off an Atari 2600 cartridge. Fast and frenzied though it could be, it had an air of classiness to it. Of calm. Nidhogg 2, announced today via the teaser trailer below, does not have those attributes.

Featuring more weapons, arenas, and a new artstyle, Nidhogg 2 looks like a good fit for anyone who enjoyed the tug-of-war gameplay of the first game. But I gotta say, those character designs, caught halfway between muppet and Simpsons character, are just bizarre. And the screams. Oh, the screams. How they will echo in my ears for eternity.

So yeah. The classy Atari-graphics game about dueling is now a higher-res game about hairless ape-men brutally murdering each other. Yay progress?