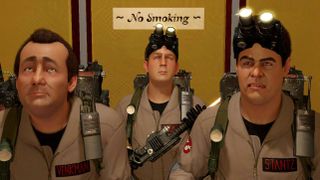 I ain't afraid of no ghost. I am afraid of, however, of a Halloween without a handful of fresh and spooky video games to play through. Lucky for me, both Luigi's Mansion 3 and Ghostbusters: The Video Game Remastered will be coming in October.

The official Ghostbusters: The Video Game Remastered Twitter account announced that the ghost hunting adventure would launch on October 4, 2019 for Nintendo Switch, PC, PS4, and Xbox One.

Ghostbusters: The Video Game originally launched in 2009 to favorable reviews. We thought it had been made with plenty of affection for the series but fell a bit short in the gameplay department. Hopefully the remaster freshens up some of its shortcomings.

The remaster was announced back in May with the original cast of the movie (Bill Murray, Dan Aykroyd, Harold Ramis, and Ernie Hudson) all lending their voices to the game. Aykroyd and Ramis did some work on the story as well.

"All of the -in-game videos and cutscenes were found on a hard drive in storage from one of the original creators and remastered in 4K HD," said game producer Matt McKnight in a post on the PlayStation Blog. "The great storytelling and audio has all been preserved while enhanced textures and lighting complete the package."

Saber Interactive and Mad Dog Games, the minds behind NBA Playgrounds and Shaq Fu: A Legend Reborn, are developing the remaster together. It'll feature the same story that follows the second movie with proton packs and PKE meter-filled gameplay.

Looking for other nostalgic trips? Check out the true story of how Back To The Future got its DeLorean (including Cocaine deals, nuclear fridges and movie budgets)