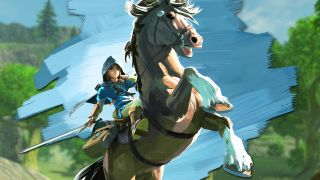 A release date slip-up on Nintendo of Europe's amiibo websites may have just revealed when Nintendo NX and The Legend of Zelda: Breath of the Wild are coming out. Or it might have been an honest mistake. But since Nintendo still hasn't told us much of anything about NX aside from its March 2017 release date, I figured it was worth diving down the rabbit hole.

As of this writing, Nintendo UK and Nintendo France's amiibo sites both list a "04/03/2017" release date for the three planned Breath of the Wild amiibo (they show up as part of a random sample at the bottom of the page, as spotted on Reddit and NeoGAF): Archer Link, Rider Link, and Guardian. That's March 4, 2017, for my fellow US-style date readers. Amiibo generally come out on or after the release date of their associated game, which puts Breath of the Wild's release date on or before March 4, 2017 as well.

Nintendo has indicated that Breath of the Wild will be a release title for Nintendo NX (it will also hit Wii U as originally planned). Transitive property, ergo, vis a vis, et cetera: the release date for Nintendo NX is March 4, 2017. That's just math!

A few issues keep this from being one-hundred percent "a-ha!" material. First off, the amiibo release date could be a mix-up - it's a Saturday and Nintendo typically releases its products on Friday in Europe. Though if the company is going for one of those worldwide simultaneous releases that are all the rage these days, that's still plausible.

But even if the date is legit, Nintendo could simply be planning to release the Breath of the Wild amiibo before the game they're based on. They don't have to arrive simultaneously. And Breath of the Wild might not end up being an NX launch title. So yeah, a lot of leaps to make there. But this is the kind of red string we start threading around when Nintendo leaves us in an information drought about its new console for months at a time!