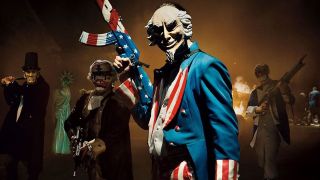 Of all the film franchises that are currently raking in the big bucks, The Purge is possibly the most surprising. It has no superheroes, no happy endings and doesn't really hold a family-friendly rating. And yet, it's made hundreds of millions of dollars worldwide. All that green is probably why the trilogy is now being steered toward the small screen.

Like the movies, the show is going to focus on what happens on Purge Night. If you've not seen the films then allow me to explain: one night every year, all crime is legal for 12 hours. It's the way society "purges" itself of... all its murderous tendencies, really. How might that story continue for the show? Apparently, it's going to be an anthology but not in the style of something like American Horror Story. As writer-director James DeMonaco says it's "more of an interwoven anthology. My idea is that you do six or seven storylines. And I would kind of intercut them, use flashbacks."

"The idea of why I like the idea of a maybe 10 hour TV thing on this, the one thing you really can't do on the films is, just because of mere real estate and time, is you can't get into the nuance and complexity that would drive someone to commit a terrible act on this night."

"Whether it's revenge or out of passion, but what might be interesting in a TV show is with a flashback narrative, if you start on Purge Night but you go back to show how people have gotten to where they are," he explains.

"Where you see a couple that's gone haywire on this night, but let's show everything that's led up to this moment of a husband trying to kill a wife -- the cheating or the accusations of cheating or money problems. It will be interesting to show those arcs, those dramatic and complex arcs that get people to where they pick up a gun or a knife and kill someone else."

As spin-off ideas go, I think it's got a lot of potential. Hopping back and forth from the present (someone's about to carve up their spouse) to the past (the couple are happily married) is a format that worked really well on the criminally-underrated Damages. That show slowly narrowed the gap between past and present over the course of a season, showing how things managed to go so horribly wrong. It'd be worthwhile using that same storytelling mode with a premise like The Purge to wring a little more dramatic tension out of it.