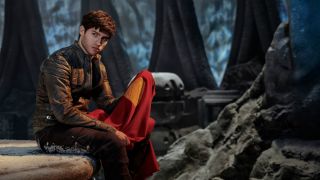 Superhero movies and TV shows love a good origin story, but what about the origin behind the origin? Batman has Gotham, but that still focuses on Bruce Wayne. Krypton, however, wants to go way, way back and pull off a tragic tale set on Superman’s ill-fated home planet. Does it work? Here’s what the critics have to say… Some spoilers follow.

"Normally, that canon knowledge of what ultimately happens to Krypton would deflate any sense of meaning. The whole thing’s just gonna burn anyway. Yet the series uses it as an advantage by placing it, silently, overwhelmingly, at the center of a pile of choices Seg must make. Knowing Superman’s origin means knowing that, eventually, Seg will face deciding the fate of a world he’s fighting hard to save. That paired with Krypton‘s seriousness and creativity has me prepping the popcorn for the full season."

“One major change to the series — which was originally going to have imagery tied directly to writer David S. Goyer‘s Man of Steel film directed by Zack Snyder — is the inclusion of time travel to the story, courtesy of Adam Strange (Shaun Sipos) who arrives in the pilot to warn Seg-El (Cameron Cuffe) of an oncoming threat that could jeopardize the future existence of Seg’s grandson, Superman. This threat, Brainiac (Blake Ritson), is a “collector of worlds” who looks like he’s directly taken from the run of writer Geoff Johns and artist Gary Frank on Action Comics a decade ago. On screen, this Brainiac is, so far, the most impressive-looking Superman villain in any live-action medium — and there has been a lot of live-action iterations of Superman.”

“If you were to watch the first two episodes, theoretically, of Krypton, the one thing you'd be guaranteed to experience is the ultra-rare phenomenon where the pacing looks like it's been slowed down to 60 percent of live action and individual scenes play out as almost slow-motion rehearsals. Or as if the entire cast had taken a very long lunch break and stuffed themselves with an egregious amount of food and they're all standing about wearily hoping someone else has the energy to spark the next scene.”

How long will Krypton last? - CNN

“Krypton clearly won't be for everybody, and like Gotham, it's difficult to foresee how long the producers can keep the premise airborne (although they've shrewdly set the show far enough in the past to alleviate concerns about its built-in expiration date). But a bit like the reboot of Battlestar Galactica -- which worked out pretty well for Syfy -- they've essentially taken little more than a title and built a credible sci-fi concept out of nothing.

To be clear, Krypton is good, not super. Yet based on first impressions, that "S"-like symbol could just as easily stand for "surprising" and "satisfying."”

“When Kindler and Goyer make an effort to establish a show of their own instead of gesturing to those that have come before, a better future comes into view. No matter how pat the storylines, each yields a noteworthy sequence or two within the first three episodes. Stripped of his family’s crest and damned to live as a “rankless” pariah, Seg-El must battle his way to the top of his planet’s harsh and corrupt oligarchy.”