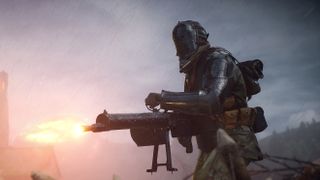 The Battlefield 1 open beta was a pretty big deal, as it turns out. A big ol' infographic (is there any other kind?) published by EA today reveals that it was the largest of any such test in company history, attracting 13.2 million players. The fact that it was open to all comers on PC, PS4, and Xbox One for more than a week probably doesn't hurt, but I'm not one to complain about ample opportunities to blow things up with train-mounted cannons.

Speaking of death trains, here are the stats:

I guess I'm weird for playing as a medic most of the time, but I can't feel too high-and-mighty; the majority of bandages I dispensed went right back into my own sucking gut wounds. Hippocratic oath be damned, it's all about those semi-automatic rifles.

EA says it's already folding the play data it took from the open beta back into the full game, including some adjustments to the mega-deadly Light Tank. We'll be able to see how it all balances out when Battlefield 1 is released on October 21.