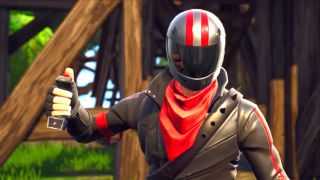 Just hours after Drake and Ninja finished enrapturing the internet with their livestreamed Fortnite Battle Royale adventures, a new patch for the game went live. Update 3.3 sadly does not include a Hotline Bling emote - though I'd be surprised if that doesn't become a thing very soon - and instead offers up bountiful Supply Llamas, sneaky Remote Explosives, and more enticing changes.

Here are the five biggest things you should know about Fortnite: Battle Royale update 3.3 before you log in to see them all firsthand.

Remote Explosives are blowing up

Live out your commando dreams (the kind where you leave your underpants on) with this tricky new weapon. Remote Explosives tear through structures, not to mention anybody standing in their blast radius, but you need to get close to deploy them. You can even set up multiple charges and blow them all at once to blindside builders - oh, sorry, were you on top of that tower? The charges have blinking red lights attached, so make sure you don't get noticed before you can set off the fireworks. These explosives drop in stacks of four, and you can find them as floor loot and in chests, Supply Drops, and even the new Supply Llamas.

Supply Llamas! They're llama pinatas! Full of supplies! And unlike the Llama loot boxes from Fortnite: Save the World, you don't have to spend V-Bucks to get 'em. You do have to be lucky though, because only three appear on the map in each game. Crack one open (don't actually hit it, just open it like a chest) and inside you'll find 500 of each building material type - that's five-zero-zero - as well as 10 stacks of each ammo type and three assorted traps and consumable items. Not as exciting as popping open a Supply Drop to find a golden SCAR and RPG, but it may be even more useful. Building mats and ammo are fundamental to success. Read more in our Fortnite Llama locations guide.

Smoke Grenades are fizzling out

You might not even notice that Epic has quietly removed Smoke Grenades from Battle Royale. At least not until a few matches have passed, and you realize you haven't been quite as disappointed by your loot recently. Ok, ok, Smoke Grenades were fun to play around with and occasionally useful for narrow escapes, but I'd typically prefer to find… almost anything else? Epic says Smoke Grenades are joining those old, way-less-useful SMG variants in the Vault, so there's still a chance that they'll return one day in an improved form.

The Stair Rotation bug is DEAD

You know this thing? Where your building reticle gets turned around for no good reason and your stairs are suddenly pointing off into space?

That doesn't happen anymore (or at least it shouldn't). Thank Goddddddd.

Xbox One now has cross-platform play

You can share your progress across Xbox One and PC now, and even opt into cross-platform matches - just make sure you're logged into the same Epic Games account wherever you play. Unfortunately, cross-platform multiplayer between Xbox One and PS4 is still not allowed - it seems like Sony may be the sticking point in letting that happen.

Make sure you take a look at our Fortnite Battle Pass Challenges guide and keep earning your way to that John Wick skin while you check out all this new stuff.